The Art of Stone and Water 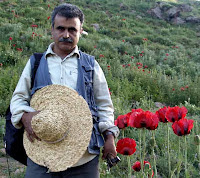 Born in 1936, in a small town, Sangsar in Iran, Nadalian has become an artist of the world. Nadalian has majored in painting in Tehran University's prestigious faculty of Arts (1988) and has a PhD in philosophy from University of Central England.

His Web site introduces him as: "A human who loves stones and water, Ahmad Nadalian moves like a fish transgressing international borders. Nadalian has traveled widely, leaving graphic messages on all continents bAntarctica in the form of etched stones, thousands of them, large and small, on which he has inscribed or painted fish, crabs, nautilus spirals, and human hands, feet, and faces." 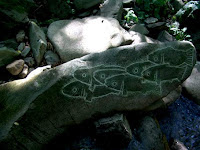 His fame became global when he presented his River Art Project in the 50th Biennale of Venice. Since then, he is invited to many countries by different art centers and his work is scattered in Italy, Germany, USA, Spain, France, Uzbekistan, Bangladesh, Lebanon, Australia, Burkina Faso, Chad, Egypt, Netherlands, Switzerland, Russia, Japan, India, Brazil, China, Greece, UK, Finland, Morocco, South Korea, Ireland, Brazil, ... where many of his work remains hidden in nature, archaeological treasures to be discover

In review of his work, writer and art critic John Grande writes:
"Nadalian is an Iranian sculptor whose life's work involves engendering respect for living creatures and the natural environment. To achieve this, besides living with nature himself, he established sculpture grounds in a peaceful environment in natural surroundings. Water is a living element that contributes to his sculptures, and many of the symbols he engraves and sculpts are derived from ancient mythology and the rituals of pre-Islamic civilizations(--Life-affirming rituals that are part of the philosophy of ancient Iranian mysticism, according to NadAlian himself.) 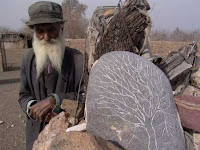 Located near the village of Ploor, 65 kilometers from the Teheran- Amol road, Nadalian designs sculptural form direct in nature; on the riverbanks are human figures, hands, feet, birds, goats, crabs, snakes and fish. Symbols of the Zodiac, the sun and the moon surround these designs, reminding the viewer that the images are not merely representations of nature, but symbolic concepts. What Nadalian intends is for the spectator searching for the artwork to perhaps discover something more valuable than his stones in nature. (Read Grande's interview with NadAlian.)
Posted by Naj 15 comments:

The real axis of evil

Israel has reached the wall and "Iran’s radical president is sinking fast, and he knows it. Now, there’s only one man who can keep Mahmoud Ahmadinejad out of the unemployment line:
George W. Bush."
Posted by Naj 26 comments: 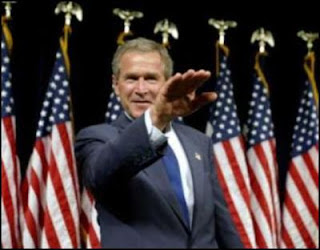 "The Americans think it is ridiculous and libelous to accuse them of acting like Nazis - and then they do. The planned attack on Iran, a people we know no better than we knew the Iraqis, will be a slaughter for which the world will hold the American people accountable. The Democratic assemble of presidential candidates - with the exception of Rep. Dennis Kucinich and former Sen. Mike Gravel - are all down for the debacle. Blood seems to be as much a part of the campaign menu as money. The only party that profits from this is the Israeli lobby, the biggest game in town.
...
Americans take great offense when their actions are compared to those of Hitler's Germany. When Democratic Senator Richard Durbin correctly stated that interrogation methods used at Guantanamo were akin to those used by the Nazis or Pol Pot's Cambodia, he was vilified by Republicans and Democrats alike. He was eventually forced to make a public retraction on the Senate floor. God forbid that Americans should be compared to Nazis.
...
...
Senator "Holy" Joe Lieberman wants war with Iran. His sick dream is now on the road to becoming reality because of an amendment to the Defense Authorization Act that he sponsored. The amendment states as fact that American soldiers have been killed and wounded by Iranian attacks in Iraq and requires periodic intelligence reports of Iranian activity in Iraq. The fix is already in, as the old saying goes. Every report will assert that Iran is behind every bombing, shooting or report of bad weather in Iraq. The amendment passed unanimously, 97-0.
...
Just as Joe Lieberman stoked the fires of war in Washington, Avigdor Lieberman, a member of Israel's parliament, claimed that NATO gave Israel permission to attack Iran. Lieberman is quite an outspoken racist who has called for the mass killing of Arabs living in Israel. It is an odd coincidence that he made his claim just as the American Lieberman got his ducks in a row to begin the countdown.

The Nazi comparison is accurate even when applied to Israelis or to American Jews like Joe Lieberman. They can be called fascist if they promote fascist ideology. The two Liebermans shouldn't be allowed to use the suffering of their own people to mask their own evil doing. It wouldn't be the first time that members of an oppressed group gladly joined the ranks of oppressors if someone else was the oppressee.
...
The world will ask Americans what they knew and when they knew it. Did they know that Iranian president Ahmedinejad never said Israel should be "wiped off the map?" Did they know that Israel is a nuclear power under no threat from Iran? Did they know that the U.S. is holding Iranian diplomats hostage? Ironically, outright lies and deliberate omissions in government and in the corporate media will allow most Americans to truthfully say they had no idea their government had turned them into war criminals."

Read the entire article on Scoop
Posted by Naj 108 comments:

The Conference of Birds 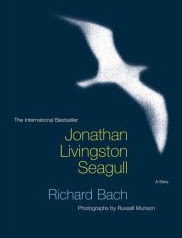 "There's so much more to flying than just flapping around from place to place! A... a... mosquito does that! One little barrel roll around the Elder Gull, just for fun, and I'm Outcast! Are they blind? Can't they see? Can't they think of the glory that it'll be when we really learn to fly? "I don't care what they think. I'll show them what flying is! I'll be pure Outlaw, if that's the way they want it. And I'll make them so sorry..." (Read the book online)

The title is borrowed from Mantegh Al-Teyr by Farid Al-Din Attar (the 12 century Persian philosopher/poet/scientist) which is in deed the precursor of Bach's Jonathan. (if you can read Persian, look for Attar on http://www.persopedia.com/) 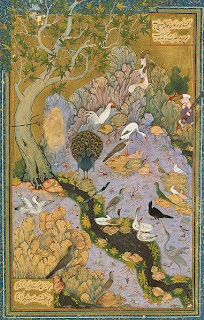 In Iran, Jonathan the Seagull was beautifully translated by Soudabeh Partowi, and published under "Parandeh-i be nam-e Azar-baad" (a bird called Azar-baad; Azarbaad could be considered a polyseme. It is a Zoroasterian name, literally meaning something like "sustained flame" or the "ablaze-wind"; the latter rather a wordplay).
Posted by Naj 40 comments: 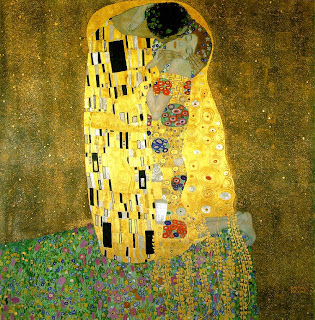 If you come to see me
bring a lantern
Posted by Naj 26 comments:

The Sound of Kindness 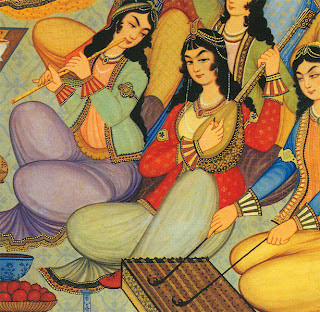 17th Century paintings
Above, from Hasht-behesht Palace.
Below, from Chehel Sotoon Palace. 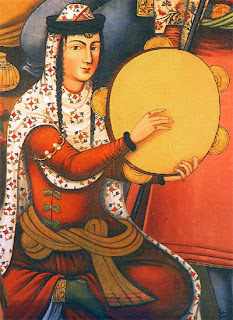 Iran celebrated The Woman's Day by holding a women music festival "The Sound of Kindness".

Iran's female musicians, with the exception of a few, have traditionally been vocalists. In early years after revolution, the female musicians suffered a setback brought about by Islamic restriction under strict orders of Khomeini. Towards the end of his life, however, he moderated his views and permitted classical and traditional music to be played and taught in public. Suddenly, music instructors popped like little mushrooms. 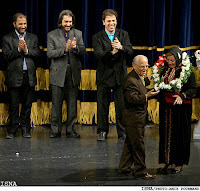 Although segregated as solo singers, women are pushing the boundaries of performance on stage. The recent female music festival was held under Ahmadinejad's renewed Khomeinist zeal against music. Thus I find it important to take note of it now! Unfortunately, I do not have access to reports and reviews. The pictures are obtained from the Payvand News. Any additional reports or information is appreciated.
Posted by Naj 99 comments:

In case you wonder the title is the sound of 4th of July fireworks ... nope! For whatever reason, after a relative media calm about Iran, the NYT has launched it's blame-blame bomb-bomb campaign against Iran this morning.

Greg Mitchel warns against NYT's amnesia: in Consider the Source!

The United States representatives propose to support an Iranian terrorist group: MKO! and this comes just as the EU makes a move against the MKO's armed opposition to the Iranian Government

As (since Mersaad Operation) I hold the MKO below contempt, I will not dedicate any time more than I have to them. Feel free to google them up.
Posted by Naj 11 comments: 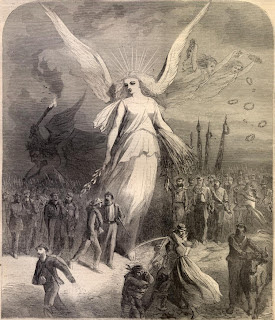 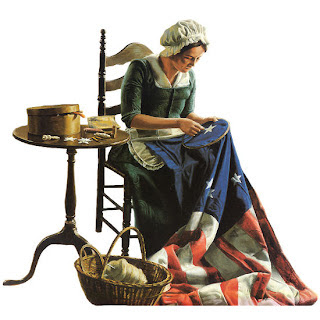 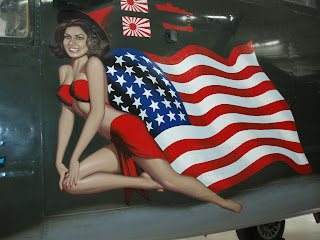 Does America need nationalism?
Thanks to my friend, Nunya
Posted by Naj 29 comments: 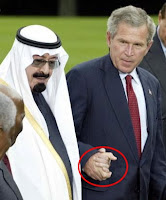 And now catch a View From the Moon
Posted by Naj 29 comments:

The Islamic Republic of Iran has devised an "Islamic bicycle." This new vehicle comes fully equipped with a cabin to conceal parts of a female cyclist's body.

Why, you may ask?

Because it stimulates sexuality, in both sexes, easily. And because the country's supreme leader, Ayatollah Ali Khamenei, announced in 1999 that "women must avoid anything that attracts strangers , so riding bicycles or motorcycles by women in public places causes corruption and is thus forbidden."

In short piece in the USA Today, Farzaneh Milani draws attention to the 19th-century America, where the newly invented bicycle, which was also used by women, was seen as a threat to the social order and a provocation to promiscuity.
Like Milani, I think that the recent bicycle ban, and the Islamic bicycle are more of the same futile attempts to control Iranian women. I just wish these old men and their vigilantes stopped making fools of themselves! If their pressures were to work, Iran's car racing champion would not have been a woman.

But Iranian women such as Poupeh Mahdavinader have shown their power on bike wheels (even though she has had to endure racial slur in the UK!)

Of course, they may export their Islamic bicycle to other Muslim countries, like Saudi Arabia, where women are even deprived of driving a car. 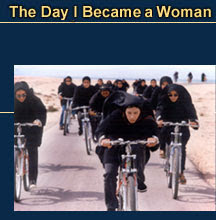 If you click on the picture "The day I became a woman", you will learn about another Iranian film. This one is somewhat surrealist. A nice one though. And applauded by many a festivals around the globe.
Posted by Naj 31 comments: