For Iran-related updates please stop by Stop The Second Holocaust and enjoy the wit and the intelligence of kindred spirited contributors of that blog.

Also, National Iranian American Council (NIAC) is campaigning to rescue everyone (both Iranians and Americans) from a war. They may need your help, or your citizen's voice.

There is a fight breaking out between Iran's power players!
Yesterday, Ahmadinejad had threatened to "expose traitors".
Ex Nuclear official charged with espionage!
Today, the parliament accepts his new oil minister.

I am too busy to write now. But I see none of these on on the "news" frontpage!
Keep an eye!
Posted by Naj 3 comments:

Is Iran Next? (Townhall meeting)

US Is Forging Evidence to Incriminate Iran

This is not surprising to anyone who reads this blog. In fact the all-lies modi operandi of Washington does not seem to be shaming anyone into any action anymore!

I am sure Bush and Cheney are wearing their disgusting grin seeing how FAR they are getting with their deceptive rule!

This just out in the Observer:

US military officials are putting huge pressure on interrogators who question Iraqi insurgents to find incriminating evidence pointing to Iran, it was claimed last night.

Micah Brose, a privately contracted interrogator working for American forces in Iraq, near the Iranian border, told The Observer that information on Iran is 'gold'. The claim comes after Washington imposed sanctions on Iran last month, citing both its nuclear ambitions and its Revolutionary Guards' alleged support of Shia insurgents in Iraq. Last week the US military freed nine Iranians held in Iraq, including two it had accused of links to the Revolutionary Guards' Qods Force.

Brose, 30, who extracts information from detainees in Iraq, said: 'They push a lot for us to establish a link with Iran. They have pre-categories for us to go through, and by the sheer volume of categories there's clearly a lot more for Iran than there is for other stuff. Of all the recent requests I've had, I'd say 60 to 70 per cent are about Iran.

'It feels a lot like, if you get something and Iran's not involved, it's a let down.' He added: 'I've had people say to me, "They're really pushing the Iran thing. It's like, shit, you know." '

Brose said that reports about Washington's increasingly hawkish stance towards Tehran, including possible military action, chimed with his experience. 'My impression is they're just trying to get every little bit of ammunition possible. If we get something here it fits the overall picture. The engine needs impetus and they're looking for us to find the fuel - a particular type of fuel.

'It now really depends on who gets elected President in the US. If nothing changes in the current course, I'd say military action is inevitable. But we have to hope there will be a change of course.'

He denied ever being asked to fabricate evidence, adding: 'We're not asked to manufacture information, we're asked to find it. But if a detainee wants to tell me what I want to hear so he can get out of jail... you know what I'm saying.' 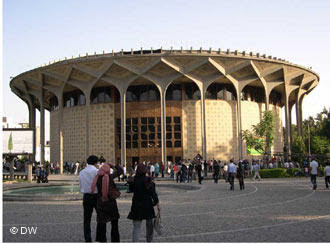 No I don't mean the passion-play between Cheney and Ahmadi-Nejad.
I mean an actual theater community inside Iran. 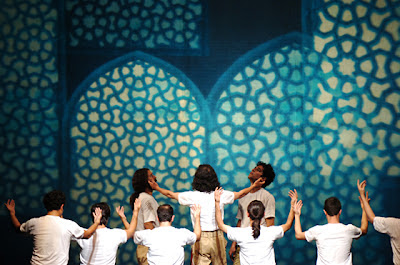 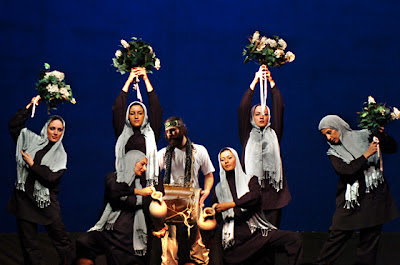 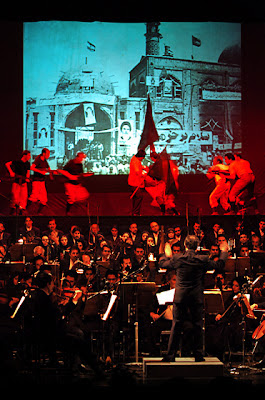 
Here's an old article from iranian.com:


At the juncture of modernity and tradition, at the interstices of time immemorial and the political reality of the moment, the Iranian society is witnessing a movement whose demands will determine the fruitfulness of the artistic future of the country. ...

At no time in modern Iranian history has the country been witness to such a surge in cultural activity. This, of course, is not an objective evaluation, but a simple observation. 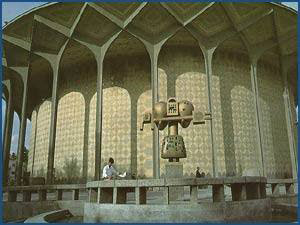 To stop only at one example, the City Theater has so many shows ready to be staged that it is hard to keep up with new ones appearing. The notorious bureaucratic disorder that is in place actually ends up shuffling and bungling many of them to the point where earlier in the year the director of BLOOD WEDDING, Ali Rafii, threatened to abort the show (written by Garcia Lorca and translated by Shamloo, and staged for a second time in the past year) because, he complained, interjections by other programs (notably Shahram Nazeri's concert in November) affected a discontinuity in the group's performance. He didn't make good on his threat, and the audience kept coming back for more, so to speak, turning the show into a box-office triumph.

The success of DANDOON TALA, a play by the renowned film director Davood Mirbaqery, has pre-empted the showing of THE RESISTIBLE RISE OF ARTURO UI, a play by Bertolt Brecht, which was scheduled to start at primetime in late December, but which was instead slotted to 4 pm with much delay. According to the press, DANDOON TALA has been the biggest moneymaker in Iranian theater history, raking in over 7 billion rials over a period of eight months.

Since two years ago, the City Theater has opened two smaller stages: the Qashqaii, and earlier this month, the House of Khorshid. Both are low capacity and easily sell out.

Merry theatrical matrimonies have also been consummated in the prolific dominion of Ataollah Mohajerani. A particularly effective one seems to be the 1997-established PARCHIN which boasts Bahram Beyzaii as a member, but also well know directors like Hamid Amjad, Mohammad Rahmanian, and actors like Mojdeh Shamsaii, Mahtab Nasirpour, and Habib Rezaii. Other groups like NARGESS SIAH (currently staging Genet's LES NÈGRES in the House of Khorshid) are also worth mentioning.

Twenty years into the Revolution of 1979, the Iranian theater is more alive than ever. Though overshadowed heavily by its more prosperous visual associate in the film industry, the theater is making it dent in ways that can be said to silverline a dramatic promise in the cultural scene of the country. Perhaps it is not too farfetched to expect a cultural renaissance of sorts in the space that has opened since the election of Mohammad Khatami into office.


When the Iranian president of the time was making progress by bounds and leaps in promoting cultural productivity, he did it on the premise of "dialogue of civilizations". He also was trying hard for reconciliation with the US. At that time, Washington dismissed him to be just a "figure" with no executive power. Thus his pleas for peace were dismissed.

It is curious how the US has started to take the "presidential figure" of Iran seriously "now" with Ahmadinejad, who a) won election as dubiously as did Bush and b)is openly challenged by the Supreme Leadeship of Iran! Don't you think?

So is it too far fetched to imagine that the West and Israel are more afraid of a beautiful and free Iran, therefore more determined to oppress a democratic Iran; and that fanticism serves their interest better?!
Posted by Naj 15 comments: 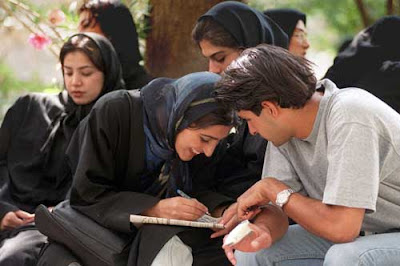 For many, a military confrontation looms just over the horizon, with the drumbeat of war growing louder and louder. Yet within Iran’s borders, a storm is brewing—of which few outside the country are aware.

In December 2006, a notable crowd of Iranian students participated in an event called “University is Alive.” They chanted, “Nothing to lose but our chains!” “Death to dictators!” “We want bread, not bombs!” This demonstration occurred despite the government’s tough measures on political dissent.

Elsewhere, as President Ahmadinejad delivered a speech at Amirkabir University, students heckled him and set his picture on fire.

A “war of words” is spreading among Iran’s youth, with talks of “change” and “revolution.”

Read the rest of the story.
Posted by Naj 3 comments:

US to free nine Iranians held in Iraq

The US military said on Tuesday that it would release nine Iranians being held in Iraq, including two of the so-called "Arbil five" arrested in January on suspicion of supporting armed militia in the country.

"It is our intent to release nine Iranians currently in custody in the near future," Rear Admiral Greg Smith, a US military spokesman, said at a press conference.

"These individuals have been assessed to be of no continuing value, nor do they pose a further threat to Iraqi security," he said.

(This is the American way of saying "Sorry! we screwed up innocent people again!")
Posted by Naj 12 comments:

The common line of Zionist vendetta against Iran is: "Stop the Second Holocaust." I suspect there are sufficient facile and inherently paranoid Jewish minds who may buy this line of propaganda.

I wish to invite all those who consider Iran to pose a threat of 2nd Holocaust and 3rd WW to provide a comparative analysis between Hitler, Ahmadinejad and George W Bush to compare and contrast who is the most likely agent of the WW3!

Imagine, if in 1933, Hitler was trying to unite the world by saying:"The Jews are going to be the cause of WW2, and we need to annihilate them in order to prevent the perils of WW2."

(You can write for my new blog: http://stopsecondholocaust.blogspot.com
Posted by Naj 14 comments:

Why is the Israel-Lobby Pushing for War?

In a 2002 article, Jason Vest of The Nation wrote about the link between the Committee of Present Danger (CPD), the Jewish Institute for National Security Affairs (JINSA) and the Center for Security Policy (CSP). This is a dense but important article that exposes the core relationship between Zionism, neoconservatives, and the new Middle East project.

Read an earlier post about the intriguing link between the Israel-Lobby, Neoconservative hawks, and the military industry complex!

Useful links at SourceWatch: Study Group on a New Israeli Strategy towards 2000
Posted by Naj 5 comments:

Rice, Hadley to be subpoenaed in Israel lobby spy case

WASHINGTON (AFP) — A US judge ruled Friday that Secretary of State Condoleezza Rice, White House National Security Advisor Stephen Hadley, and other top officials can be subpoenaed to testify in a spying case against lobbyists for Israel.

Federal court judge T.S. Ellis ruled to allow the request by lawyers for Steven Rosen and Keith Weissman, former lobbyists for the American Israel Public Affairs Committee, to subpoena Rice, Hadley and 13 other current and former top government officials to testify in the case, according to court documents.

Rosen and Weissman, accused of passing secret US defense information to unauthorized people while they worked for AIPAC, hope the testimony of the government officials will support their defense that they were not engaged in spying.

"The defendants claim that testimony from these current and former officials will tend to show that the overt acts reflect nothing more than the well-established official Washington practice of engaging in 'back-channel' communication," according to Friday's opinion issued in Alexandria, Virginia