Up close and personal ...

I am in a stage of my life that I think many matters do not deserve more than a line to say about. I am making a facebook page for Neo Resistance to do that--occasionaly.

And I keep this blog for writing in detail about what inspires me.

Circumstance will be getting plenty of attention. 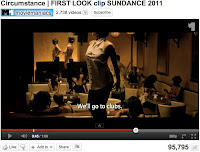 Circumstance will be loved by people who take pleasure from watching its gorgeous Iranian girls dance, flirt, perform erotics on eachother, half naked, half dreaming, half asleep, half awake.
Circumstance will be talked about as the first Iranian film about 'Lesbians'.
Circumstance will likely offend the sensitivities of some fundamentalist here or there for desecrating Qoran recitations and breaking Iranian-Screen taboos.

Circumstance will be known as one of the first (the increasingly emerging) "autobiographical" tales of "underground" Iran; one of those that reinforce the illusion of those who see and know Iran through such autobiographical "documentaries" by the upper/middle class westerner-than-Westerners Iranians (often second generation immigrants like Keshavarz).

One film buff would give the film credit for cinematography and edit; describe its extreme close ups of red lips and red satin sheets and 1001-night mise-en-scenes; perhaps paying hommage to Bergman's Sonata, Woody Allen's Bourgeois swank, Kar Wai's oriental moods and Fassbinder's (homo-)sensualism.
A critic would criticize it for crude performance and the poorly written and performed dialogues, many of which do not make any sense nor suggest anything sensible. Another would praise it for the abundance of political 'points' it makes about corruption, repression, depression and etc.
As a first it deserves applause: it is an interesting film, it is courageous and uncompromising. It is also beautifully shot, coloured, lit, and framed. As such, Circumstance succeeds in being a general-pleaser, a departure from the Iranian new wave cinema; thus winning Sundance's audience-choice award.
Circumstance entertained me; reminded me of how it was to be young and naughty under the surveillance of the "Big Sisters" in school; it made me chuckle a couple of times over the accent of the American-Iranian boy who wanted to change Iran by dubbing Milk, and immitating Sean Penn's "gay" voice!
Overall, I liked the film, it wasn't a waste of my time--although I did look at my watch a few times, impatient to get to my supper instead of suffering political/romantic cliche.
I am used to watching slow films, without dialogue or stories, without a blink. And I am familiar with all the pedantic film-school elements that were packed in the film to make it gorgeous. Clearly, this film was made by a brilliant NYU film-student.
But as a whole, the film failed.
It failed to impress because it aimed too high. Simply, there was too much in the film; too much of the many little things that would have been good on their own, but too cluttered and confused to enjoy in one film. Had she been advised that "less is more", this would have become an art-film.
What distracted me from the "goodness" of the film was its politically judgmental edge. From the get-go, it set the stage for the brother to be a "loser": a musician turned addict turned fundamentalist muslim, turned extortionist until his Islamist opportunism made him fortunes and got him fake love!
The film would have been just as good had it avoided cliches such as making the parents of the gorgeous Lesbian Shireen into politically-killed university professors, whose death haunted their daughter into marrying the loser/opportunist/fundamentalist brother!
The film would have been better without the dialogue of Atefeh and her father on the mountain. The ill-executed conversation about how she was suffering the revolutionary sins of the father! These cliches are too cheap and too common to be effective any more.
This film was about Circumstance (شرایط) that defined people of the film into becoming something else to survive or thrive. To weigh the responsibility of all that people become on "Politics" made the film light on developing characters and persona who carried the weight of their choices.
It took Keshavarz 5 years and 40 edits to finalize this film. I hope in her next film she lets go of the "protest banner", for when it comes to lasting political films "less is more".
P.S. I wrote this post first, and then decided to see what other people have been saying. I added the links, where they corresponded to what I had guessed would be said about the film.
Posted by Naj 5 comments: 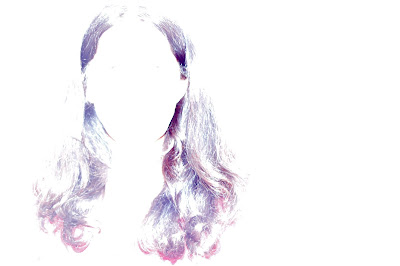 These days, the incredible sentence given to the theater actress Marziyeh Vafamehr, one year of imprisonment and 90 lashes for appearing without head dress in an Iranian-Australian PhD-dissertation film by the Iranian Poet, and recently film scholar, Granaz Mousavi, has shocked the theater and cinema community into action.
How can it be? After all, appearing without a scarf and with a shaved head in post-revolutionary Iranian films is not new. Here's a list of precedents: 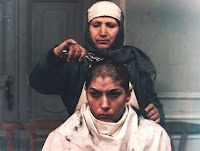 The fist (controversial) bald appearance on screen was by Farimah Farjami، in Masoud Kimiaii's thriller Lead in 1988 (سرب، مسعود کیمیایی). The film was about a couple of Iranian jews who wished to migrate to Israel in the 1940s, but witnessing the assassination of their Anti-Zionist uncle by a paramilitary group HAGANAH (that later became Israel's defense ministry), makes them a target and forces them into hide and seek exile. [*]

The second notable instance of a bald actress was in Abbas Kiarostami's critically acclaimed 2002 film Ten; where a heart-broken girl who rides with the main protagonist, encounters her for the second time with a shaved head; losing her hair to deal with the loss of her lover.

The third, is Women's Prison (2002), a unique film in the history of Iranian cinema, by Manijeh Hekmat, depicting the lives of three generations of women prisoners: convicted killers, political prisoners and delinquent teenagers. Here, Mitra (Roya No-Nahali) appears with a shaved head, a punishment for her disobedience in the Prison.
The credit for the following list goes to a "fundamentalist" blogger whose post was WARNING the "prostitution" in Iranian cinema (yes, if you do not have complete Hijab, in their view you are a prostitute) manifesting itself in the form of bald actresses!

Quarantine, 2008, (قرنطینه): By Manouchehr Hadi, a love story that begins with a car accident, when the rich boy falls in love with the poor girl, but cannot marry due to class difference. The woman suffers Cancer and begins chemotherapy --hence the shaven head. However, this film also arose complaints from the clergy (the pro-green ones, actually) for allowing a woman onscreen without headdress!

Bad Kids, 2001 (بچه های بد)، A film by Alireza Davoodnejad, about a chance encounter of a couple of Iranian guys with a runaway girl who survives suicide, and confesses to murder. The film did not receive enough box office attention to alert the moral-police; however according to a couple of reviews, it was an artistically successful film (I have not seen it myself.)

The Four-Finger, 2006 (چهار انگشتی), film by Said Soheili, and action film--presumably government funded and moralistic, with good guys and bad guys and a femme fatale; and from what I gather, full of cinematic "excess" but a box office flop. I could only find one picture of the "bald" actress from the fundamentalist's site.

Scent of Paradise, 2001; (بوی بهشت), by Hamid Reza Mohseni, about a broke pop star heads to a getaway in the North, and falls in love with a runaway girl who pretends to be a 'deaf and dumb' boy--hence the shaved head.
I don't understand Vafamehr's sentence! I don't understand why this film My Tehran for Sale, that according to the director was filmed with a permit, would be a candidate for such harsh treatment. If anything, the film is in line with the moral judgment of the IRI: "that the pro-western youth are a disillusioned bunch."
In a sequence of the film, a group of young men and women arrested in a mix party are sitting in prison, awaiting their turn, as they listen to the dreadful sound of lashes and screams of their friends breaking the silence of the cold room.
Has the IRI theater become so macabre, to make a fiction film come to reality, by lashing its delicate actress, before the eyes of the world? I hope to be proven wrong.
* حکایت جلال معیریان
Posted by Naj 1 comment:

Iranian terrorists being the headline news?!?

Seriously; uncle Sam, what is behind all this?!
Need excuse for Saudi-pimped war-mongering?!
A couple of Iranians subcontracting a Mexican drug ring to do their dirty jobs?! I always thought they are master-terrorists, according to your allegations of their bombing in Argentina and Saudi Arabia and etc.!!! So now, the master-terrorists have become so STUPID to subcontract their dirty jobs?!! This looks more like an MKO- or Mossad-inspired conspiracy to put the political and military screws on Iran.
Juan Cole counts a few much-repeated-by-MSM "facts" about one of these big bad terrorists.
And here's another account by Tehran Bureau's Mohammad Sahimi, an ardent opponent of the IRI, who finds these charges unbelievable.
F... YOU AND YOUR SANCTIONS!
Posted by Naj 4 comments: