Mohammad who was the funniest of us used to say: "The oxygen in your capsule is untapped." Sometimes we competed in holding our breath. I was the last to let go. This is why I was the permanent member of any operations depending on silence and camouflage.

"Death in water is martyrdome", Ali had said once, "so martyrdom in water is a double blessing." In fact, this is why Ali had become a diver. Mohammad used to say, "Ali is like a fish, he can't stand the earth. If he had your lungs, we could not pull him out of water."

Ali was from Tigris, a child of Shatt. He used to say that Al-Faw and Majnoon were not islands, but a mass of haunted humans who have turned into the shape of an island. He used to say if someone dies in these Southern waters, he will become part of Majnoon [1].

Now we are all lying next to one another. We were supposed to be at the bottom of the waters.  We were supposed to see the rays of sun dancing through the waves when we looked up. We were supposed to collect colourful stones and sea shells for Mohammad's 3 year old daughter. Instead, smell of dust is filling my nostrils. They have laid us straight next to eachother. Handcuffed. I turn to look at Ali. He is restless, like a fish out of water. It breaks my heart.  I

turn from Ali to Mohammad. His face is on the ground. In his weakened face, there is still a sparkle of humor. He says: "it wasn't our destiny to become water martyrs".

I hear bulldozers. Now they are dumping earth on us. I hold my breath. Mohammad shouts: "Don't be foolish, this way you will suffer more." I don't hear him any more. Earth has filled his nose and throat.

Ali and Mohammad are both next to me. I can feel them moving under earth. My chest is heavy. Layers of earth become thicker and thicker. My body begins itching. The heaviness of the earth is crushing my ribs. Ali and Mohammad are not moving anymore. *We were supposed to die in the water,  I mean this is what we thought, but not by drowning or suffocating.* Ali used to say: "water doesn't suffocate us, but earth kills us."  Now were are dying under earth, tons of earth.

I don't know if my eyes are open or closed. But they burn. I cannot remember the taste of water. I think of Mohammad and Ali. Ali must have become a part of Majnoon now; and Mohammad a piece of colourful stone in his daughter's hands.

The fish who dies last suffers the most, for he sees the death of the other fish. But I ... am still holding my breath. 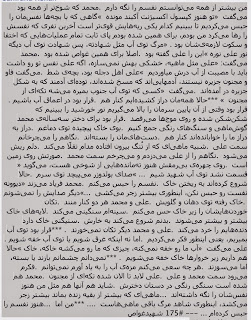 [1] Majnoon in Arabic means "crazy". The etymology is apparently related to the massive amount of oil reserves in a single land mass. Iraqis used chemical weapons on Iranian troops to take the Island back. It is recently discovered, upon the return of the bodies of the missing Iranian soldiers, that Iraqis had buried them alive. If these atrocity reminds of you ISIS practices, don't be surprised. The ISIS is led by the disenfranchised Saddam military men.

These kinds of Nazi-like operations can only stem from the sick minds of the likes of Rumsfeld.

How I Learned to Relax and Not Worry About the Bomb 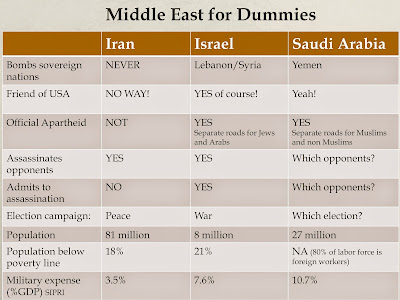