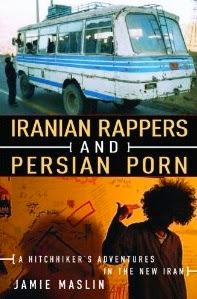 When I bought the book I expected to read one of those annoying upper middle class tales of nagging about freedom (there lack of) and fundamentalism and the kind of self promotional bourgeois-autography for which the publishers seem to have a palate.
But, this turned to be a surprise; a hilarious one.
A poor British backpacker, with a couple of thousand dollars of saving, quits his job and hitchhikes to Iran. This book is about his adventures.
Luckily for Jamie Maslin (and his readers), he is shielded from the upper-class Tehrani society (about whom we often read) for most of his trip (although he meets and spends enough time with them to give us a sense of what they are like, too). As such, his book is full of real Iranians, the other 50 million, who come in all shapes and shades and present him with the paradoxical complexity of the Iranian life and culture. Succinct, but his recounts are full of details, simply but lucidly written facts about all things he encounters.
This book took me home, to scents and scenes of Iran, and made me laugh, laugh really hard!
I won't spoil it for you. Treat yourself to 17 dollars of fun!
Posted by Naj 13 comments:

United for Peace: meet the Iranian faces of America

Staged 'activism' of Golshifteh Farahani or Media Opportunism of the 'spontaneous generation'?

Today, another physicist is blasted up, by a magnetic car bomb.

This makes the number of science victims to 5. Here's a list, in chronological order.


I find it interesting that three of thse assassinations have happened in 15, 12 and 11th of January.

The latest attack (Jan 2012) comes five days after Iran officially announced intention to resume negotiations with the group of 6 over its nuclear program.
Posted by Naj No comments: