Something bigger than a phone call, after 35 years ...

A few days ago, at about the same time that the president of Iran was landing in NYC, I hovered above Manhattan, heading South to Florida, armored to fight an old battle. Comfortably seated in front of a large Boeing, looking down on the green land of the New England, the Potomac river, the Philadelphia farms--the Empire, densely populated with a republic who champions and cherishes freedom and hard work, I wondered how was Iran's president processing the landscape on his first official voyage to NYC.

My personal observations (and numerous similar stories I have heard ever since), have poisoned me to think America is a rotten place--ironically over its health-care/welfare/labor politics/policies about which the Americans themselves have grown wary enough to hopefully seek change. I also remain convinced that America's potential to change is the best hope that humanity has got!

I think the biggest CHANGE factor is in the modes and manners of communicating with the "other".

Despite what everyone calls a "cautious approach", I believe what is before us is larger than just good old diplomacy, it is a realistic honesty that is perhaps marking a new form of diplomacy.

In this new world where we have become accustomed to voting for future pop stars with a mobile phone, where we are 'like'ing and 'tweet'ing our next presidents; the diplomatic game also needs to be played on open stage, as a "reality" popularity context. People will buy more eagerly, what is before their eyes, raw and naked. And this is how I think our new world shall begin; through OUR demands for transparency, and our expressed opinions.

This is a first example:

In an unprecedented move, upon being appointed, Iran's Foreign minister and Nuclear negotiator, Javad Zarif, set up a Facebook account (triggering debates in Iran's censors about un-filtering access to facebook and its beneficial function). On his facebook, with 315K fans, Zarif keeps us up to date about his activities--sometimes as mundane as falling asleep in a meeting due to jetlag. When he accepted the job, he posted: 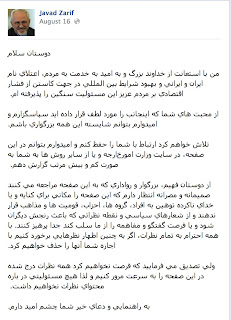 
I have accepted this job, asking help from god the almighty, and with the hopes of serving the people, elevating the reputation of Iran and Iranians, and improving the international situation towards reducing the economic pressure on [my] dear people.

I Thank you who have extended your kindness to me and I hope to be deserving of your gratitude.


I will try to keep my connection with you, and I hope to be able to report to more or less frequently, on this page and through the web site of the ministry of Foreign Affairs.

Of my intelligent, gracious and considerate friends who visit this page, I request sincerely and insistingly, to not turn this page into a forum of complaints or (god forbid,) insults directed at individuals, groups, parties, ethnicities and religions; and to seriously avoid political slogans that are hurtful to others and distract us from the chance of dialogue and understanding. With due respect for all opinions, should I encounter such, I will remove them. But you will agree that we will not have time to monitor all the expressed opinions, and hence, we take no responsibility for the content of the statements.

I look forward to your guidance and your prayers.

This attitude is a major break-away from the old attitudes of Iran's ruling elite:

1) By daily reporting of his activities as a Foreign minister, he is educating the general public about the nuances of diplomatic relations. This is the first step in opening a window into the operation of a state, for a society that has historically distrusted its governments, treating them as extraterrestrial or puppet entities. Not only does he report, but he also reacts to critical or constructive views. For example, after Obama-Rouhani's phone call triggered an angry reaction from the hardliners in Iran who invoked the memory of the War and the Blood of the martyrs, he quickly responded (albeit indirectly, and without any confrontation) by acknowledging the week of the Sacred Defense, expressing his respect for the war veterans and stating that half of the foreign ministry staff were war veterans and that he hoped to uphold all the values for which those martyrs had died.

2) By joining the social network, this minister is seeking the opinions of the people, and although he puts up a request for respect and tolerance, but he does not dictate any mode of behavior, nor he states any strong or dogmatic opinions of his. He even addresses those, who may be potential "bigots" as "the intelligent, gracious and considerate". More importantly, in a country where cartoonists used to get punished for depicting officials in critical drawings, Iran's new foreign minister "shares" cartoons of himself! This "embracing" attitude was also on display in the second half of Rouhani's speech in the UN.

3) He puts on display one of the finest of Persian mannerisms. He is thoroughly courteous, and humble, he puts his faith and his powers in god's hands and he asks for understanding, forgiveness and guidance from his audience. With this humility, he sets a new tone to the voice of a nation that has gone coarse in the past 35 years shouting death-to-X,Y,Z slogans. What the western pundit calls "charm offensive" or "charm onslaught" is nothing but Persian mannerism. This is how people treat each other in Iran, no matter how deep the mutual distrusts and the feuds. (in fact, to request a phone call with Obama was a perfectly normal and polite thing to do in our culture, because Rouhani had first refused to meet face to face with Obama and it was only normal to make a later phone call. This is also a break from the hostile and impolite tone and actions taken towards America in particular (and the west in general) in the past 35 years.

This honesty could be heard in Obama's UN address as well:

All of us must recognize that peace will be a powerful tool to defeat extremists throughout the region and embolden those who are prepared to build a better future. And, moreover, ties of trade and commerce between Israelis and Arabs could be an engine of growth and opportunity at a time when too many young people in the region are languishing without work.

So let’s emerge from the familiar corners of blame and prejudice; let’s support Israeli and Palestinian leaders who are prepared to walk the difficult road to peace.


And while we recognize that our influence will, at times, be limited, although we will be wary of efforts to impose democracy through military force, and although we will, at times, be accused of hypocrisy and inconsistency, we will be engaged in the region for the long haul, for the hard work of forging freedom and democracy is the task of a generation. And this includes efforts to resolve sectarian tensions that continue to surface in places like Iraq, Bahrain and Syria.


[T]he United States has a hard-earned humility when it comes to our ability to determine events inside other countries. Now, the notion of American empire may be useful propaganda, but it isn’t borne out by America’s current policy or by public opinion. Indeed, as recent debates within the United States over Syria clearly show.
The danger for the world is not an America that is too eager to immerse itself in the affairs of other countries, or to take on every problem in the region as its own. The danger for the world is, that the United States after a decade of war, rightly concerned about issues aback home, aware of the hostility that our engagement in the region has engendered throughout the Muslim world, may disengage creating a vacuum of leadership that no other nation is ready to fill.

I believe such disengagement would be a mistake. I believe America must remain engaged for our own security, but I also believe the world is better for it. Some may disagree. But I believe America is exceptional. In part because we have shown a willingness through the sacrifice of blood and treasure to stand up not only for our own narrow self interest, but for the interest of all.

I think I agree with Obama ...

But what is significant in the events of the past few days is that these politicians have risen above the politics (without disengaging from politics) to be the voice of the people who have invested a hope for change in them. What is significant is that "we", the people, do have a voice now, that we are heard by the politicians who want to make it to the pages of history (perhaps not the lobby-paid Majlis/congress(wo)men), that when we say we won't die in vain, we are taken seriously; and that politicians are more eager to gamble on winning our approval, than to gamble on winning a war. No attack was launched on Syria, none will be launched on Iran, and nor on Israel.

For 35 years, I grew up in a poisonous and paradoxical stand off with an enemy-friend, America! For the past 8 years, I have been fighting hard, here, in neo-resistance, to make sure my country would not fall victim to the malicious desires of the mis-translators who are still banging their war drums.

And since a few hours ago, I have been sniffing the fragrance of PEACE ... but more than peace between Iran and America, what matters to me is the peace between Iranians and their government. This is just the beginning. If Iran and America have 35 years of hatred to iron out; Iranians and their government have 350 years of distrust to fix. But Rouhani's on the right track. And even to his subtly distrusting critics, he seems like someone who has been on the right track from start.

Netanyahu is huffing and puffing, but we must turn our eyes towards Russia now ... potentially a more dangerous friend than is the current enemy (or the bargaining leverage?), Israel ...
Posted by Naj 14 comments:

I have goosebumps ...
I can just say Obama's speech has left me speechless ...