Goodbye Kiarostami: The man of LIFE AND NOTHING BUT.

I never wrote about him ...
I wrote about Mehrjui, and about Baizai, but not about him because the world had already discovered him when I learned to write in English.

I discovered him when I was a renegade 18-year old poet and skipped my Electrical Engineering classes, to snuggle in the back of the Cinemas Asre-Jadid (Modern Times), near my university and to discover cinema with Tarkovsky and the opposite of Tarkovsky, Kiarostami, in repeat viewing of  Homework, Where Is the Friend's Home? and Close-Up .

I left Iran around that time, and his films did not leave me alone. Omnipresent in international festivals, Kiarostami and a wave of alike films out of Iran, became the rope of cultural pride to which I clung, as an immigrant from the unwanted country of Iran ...

And Kiarostami, his films, his depth, his peace, his gaze is responsible, single handedly responsible for putting The Iranian New Wave on the map of the world cinema. I never wrote about him, because the world was busy writing about him and about many of his students, such as Jafar Panahi. But if it were not these filmmakers, if their proactive debunking of all the falsehood the world media is capable of feeding innocent minds, I am convinced, Iran will not have been living the peace which was taken from its less culturally-active neighbors.

Kiarostami ,,, the man who refused to acknowledge the violence in world, and in the midst of pain and agony, death and rubble, talked and saw LIFE AND NOTHING ELSE.(*) 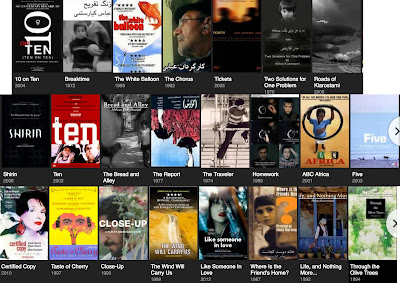