Golden Quince and its ruby Jam

How do you go from the yellow fruit to it red jam?
A pictorial instruction on the facebook page. 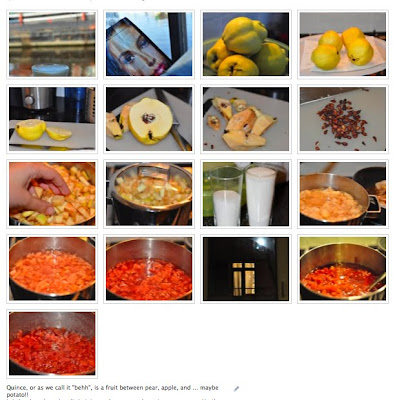 Who is the real terrorist?

Here, there is enough said about the rumors that Mossad and the terrorist opposition to Iranian regime, MEK, are congratulating themselves about successful sabotage of Iranian military base. I recommend this post by Richard Silverstein.
Because the Iranian officials are denying possibility of sabotage, I am not going to comment or speculate. We are in war-times and like a good citizen, I will stick by the military command of my country.
However, this song, The Seven Devils, by Florence + The machine, really resonates with me on this occasion:

Holy water cannot help you now
See I've had to burn your kingdom down
And no rivers and no lakes, can put the fire out
I'm gonna raise the stakes; I'm gonna smoke you out

Seven devils all around you
Seven devils in your house
See I was dead when I woke up this morning,
And I'll be dead before the day is done
Before the day is done
[ Lyrics from: http://www.lyricsmode.com/lyrics/f/florence_and_the_machine/seven_devils.html ]
And now all your love will be exorcised
And we will find you saying it's to be harmonized.
And it's an even sum
It's a melody
It's a battle cry
It's a symphony

Seven devils all around you
Seven devils in my house
See, they were there when I woke up this morning
And I'll be dead before the day is done

They can keep me alive
'Til I tear the walls
'Til I slave your hearts
And they take your souls
And what have we done?
Can it be undone?
In the evil's heart
In the evil's soul

Akbar Ganji: Another look at Israel's bombing of Iran 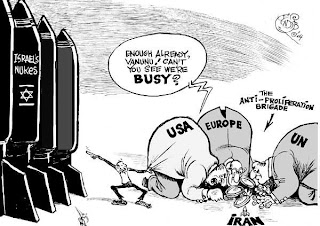 I understand those who protest that some countries have weapons that others do not. No single nation should pick and choose which nations hold nuclear weapons. That is why I strongly reaffirmed America's commitment to seek a world in which no nations hold nuclear weapons. And any nation – including Iran – should have the right to access peaceful nuclear power if it complies with its responsibilities under the nuclear Non-Proliferation Treaty.

It is possible, and a must, that with a collective security agreement, guarantee the security of all including Israel. But, defending discrimination and special rights is against the values of democracy and human rights. The middle east has a young population. This generation that doesn't withstand the local despots, will not stand for the foreign ones either.
It is true that true independence comes from a national government with the actual votes of each citizen. However, the foreign aggressors cannot beat on the head of a nation with the excuse that the local despot is beating them.
P.S. Sorry I have not read this and it is perhaps full of typos and etc; but judging from the mushroom explosion of the text in the facebook, I thought it is important to provide the world with "another look". I now have to eat breakfast and earn a living, so please forgive errors and point them out to me for correction. (Naj)
Posted by Naj 6 comments:

Dariush is our king of pop! His songs and his voice made me cry throughout my teen years. I stopped listening to him when I "grew up" and became a 'tough' girl who needed to kill Iran in her in order to succeed "abroad". I heard a version of this song on the facebook; and it made me cry. I just share it with a translation of the lyrics. Let me know if you like the music. I am curious.

Look تماشا کن
Your silence has deepened the night سکوت تو عجب عمقی به شب داده
In sleep, you are like a sketch تو خواب انگار طرحی از
of a flower, the moon and a smile گل و مهتاب و لبخندی

I am homesick ... my family has all left my end of the world, they are all in Iran; and I am digging photos. And putting them on the facebook page of my blog.

Something about facebook is soothing to my short temper of these days and my short attention span.

I want to go home ... to go to Iran; and smell something familiar ... my mother.