Iranian executioners have gone awry ... But Iran gets a new legend, Ali Saremi!

Ali Saremi, the 62 year old prisoner, is killed.
He was hanged yesterday; abruptly, without due process, when his family was awaiting news--because they had heard rumors of their father's execution, yet they had hope that the rumors were unfounded as the legal procedures that would indicate his execution was imminent were lacking.
Their fears came true when two ambulances stopped in front of the Iranian Bastille, the shameful Evin, when the chants of Hossein Hossein rose, just before the morning prayer, marking the orgy of the blood thirsty executioners of the regime, Ali Saremi and another activist, Reza Sharifi Boukani (whose 'abhorring' crimes allude me and the search engines!!!) were dead.
Ali Saremi's death-worthy crimes were:
0) Political opposition!
1) speaking in a memorial ceremony, at the mass-grave of Khavaran, remembering the genocidal execution of thousands of Iranian prisoners (Sorry that I must use this term in a blog about my country, but this is when a lot of Iran's political youth met their death because some "asshole" decided they were blasphemous and did not believe in Islam!)
2) traveling to Camp Ashraf in Iraq, to visit his son, a member of MEK which is the armed resistance group, that is loathed by many Iranians for their violent tactics and the incompetence and selfishness of their leaders, who seem to have imprisoned these runaway kids in Camp Ashraf! (throughout this blog, I have not hid my hatred for the leadership of this group, and have not shied away from criticizing them with all contempt ... but no affiliation, no crime calls for a human to call another human, I LOATH the killers, I loath them ...)
He has been on and off in prison, since 1989 ... recently, he picked on Ahmadinejad, and remained defiant when his execution sentence was announced ...
...
I am incoherent, because I am too upset ... I am upset because I KNOW all these sudden executions are scare-crows ... Ahmadinejad, the fucking Ahmadinejad and that IDIOTIC judiciary system think they are instilling fear in the hearts of the cattle ... the cattle who is to suffer hunger and unemploymengt after their "economic" revolution!!
But they are WRONG!
Saremi's daughter is ironically called Zeynab--and she has written a short moving piece that crystalizes the sentiments of us! I say ironically because Zeynab was the sister of Imam-Hossein. Imam-Hossein is the icon of shiite resistance, the man who chose death over life under shame of complicity with tyranny. Zeynab spoke bravely and passionately on the body of his martyred brothers, when they were killed some 1300 years ago, on "ashura"! Even more ironically, Asura event were commemorate just two weeks ago. And, what more? During, this month, "Moharram", Muslims are prohibited from war and killing!! So much for the champions of Shiism in the world, so much for the Islamic Republic of Iran, so much for the followers of Hossein!!
Zeynab Saremi wrote:

I write this letter, for the noble spirit of my father to hear!
My dear father, I wish I knew if you felt our presence behind the Evin walls! In the cold of the winter we shivered, while the guards had taken refuge in their heated vehicles.
Father, I had come to see your moon face.
Father, I had come to let them punch me, mother and my sisters in the heart, but let you remain to defend my country!
Father, it didn't take more than 20 minutes before two ambulances that were marked "inspectors" pulled over, around the dawn; and before entering the iron door of Evin, the chants of Hossein Hossein Hossein broke the cold silence of evin; the call to prayer rose and merged with the starry moonlit night.
My entire body froze inexplicably, we sensed the goosebumps on our body and faces, and after the prayer-chant the guards left, and we remained ...
Father, I saw you fly away and leaving us behind; but we have not stayed behind, look at your footsteps ... all the world has come to march behind you, even with broken heads ...
Father, I love you from the bottom of my heart, I love you, I love you ...
Zeynab Saremi
Dec 29, 2010

Every decomposing body in the grave fertilizes our Green garden of eden ... these serpents will be driven away ... this is the courageous plea of Saremi's daughter, who breaks my heart to thousand pieces, shrapnel that will defeat these fascist invaders out of Iran, mark my word.
(Translated by Naj.)
Posted by Naj 6 comments:

They have sentenced a Kurdish student activist to death (on the bogus charges of armed encounter with the IRGC). His execution, which was to take place yesterday, got stayed! But, the IRI has arrested all of his family members and no one knows where they are (see this for English) and what is going on! In the meantime, they may have started preparing another execution stand, for another Kurdis student, Reza Sharifi Boukani, in the shadow of the media attention invested in Habibollah Latifi!
Why now?!
Remember the "economic reform of Ahmadinejad"? Well, from what I hear, this economic reform is going to starve and unemploy many of those 58 million Iranians who are already on the beggar's list (and will receive 40$ per month in compensation.) The little militant boys don't want trouble and as always, killing the Kurds and the Balouchis is the best scare-crow. These are the least internationally supported minorities. And the Persian Iranians can easily turn a blind eye on their execution because, well they are advertised as militant secessionists, and god forbid if anyone questions the territorial integrity of Iran ... And these are not women either to get the feminists mobilized, but they are good examples of how fierce and scary the Iranian regime is. People who believe in the fearfulness of their governments are obedient and manageable.
Anyways ... Happy holidays to you too!
Posted by Naj 5 comments:

On the sacking of Iran's Minister of Foreign Affairs:

I didn't like this fellow, although compared to Ahmadinejad he was mellow. But, the haste with which Ahmadinejad fired him (while he was on a diplomatic trip abroad), and his resolve to f%#k up universally, compells me to SCREAM:

I HATE THIS BASTARD AHMADINEJAD.

Really, don't look for any deep meaning into this, and don't expect any analyses. Ahmadinejad doesn't make rational decisions ... the psycho!
Posted by Naj 2 comments:

Last week, the criminal court decided to carry out the punishment of death for a woman (Shahla Jahed) who was accused of killing the wife (Laleh Saharkhizan) of her famour soccer-player lover (Naser Mohammadkhani).
This was Iran's O.J Simpson trial; except that here, there was a woman to prosecute, and evidence for the potential involvement of Mohammadkhani were all slipped under the rug.
Judging from the videos of her court proceedings, this woman, Shahla Jahed, did not seem mentally fit, she seemed to have a dependency complex, a bit of megalomania, and plenty of exhibitionism. In other words, not only the likeliest scapegoat, but also the one who could compromise Mohammadkhani's facade most, with her public outcry of love and devotion to him. (In Iran, men are allowed to marry up to four times and have as many temporary marriages as they wish, but the practice is HIGHLY frowned upon in the stoic Iranian society).
I didn't care about the trial, the gossip, and whether she had actually committed murder or not. I am opposed to death penalty, for ANY reason, so death sentence hanging over her head unsettled me as it does for anyone, anywhere in the world. But, what has been occupying my dreams and nightmares, since her killing, is the fact that according to the Iranian/Islamic law, the family of the victim have the right to pardon the killer. The victims family carried their revenge desire for 9 years, during which, due to doubts about the trial, several execution stops were ordered. In Iran the execution of the first-degree murderers is carried out under the will and by the hands of the victim's family; it is they who pull the chair off. As draconian, even that did not surprise me.
What has been eating me up since, is the fact that it was the teenager son of the victim who was given the "honor" of killing this young woman; in presence of his grandmother--who refused to pardon the crying-begging Shahla on the gallows, and his father--who was the main culprit as far as having married a second woman temporarily and having fueled the fires of jealousy that burned both his wives, when he happily took off to London and to Quatar, living his life as if nothing had happened--and then claiming victory when the judge gave his second wife a death sentence!
That a teenager carried out this execution is unforgivable. I have been getting into all sorts of arguments to insist that this is where personal and political merge, but where the act of the individual can neither be excused, nor explained or blamed on the corruption of the government and inadequacy of the system.
Beside that, many sociologists and lawyers have been discussing this case, and many argue, convincingly, that
But, how cruel are Iranians?
To answer this question for myself, I surveyed reader-reactions to this event on one of the first sites that reported the execution: Jame Jam. Jam-e Jam is a conservative newspaper and an offspring of Iran's notorious broadcasting organization; one of the first internet news sites to launch in Iran. 137 responses were recored. Of these, I included 120. (the rest did not address the issue of death penalty for Jahed, they were mostly complains about comments not posting fast enough). I colourcoded the responses:
15% Red (18 comments): people who were happy about the execution and who thought revenge is the right of the victims, and thought that this execution will set an example for other women to not stray off!
36% Yellow(44): people who thought the main culprit was the soccer player, Mohammadkhani, and wished for his trial, although a handful said they wish it was him hanged and not his concubine!
48% Green (58): people who deplored the act of revenge, some respectfully and some not so respectfully, reminded the victim's family that having a teenager Kill is unacceptable, and that in Islam (citing Imam Ali, the first Imam of the Shiites) forgiveness is emphasized just as much as right to revenge for the killing of a blood relation.
I let the picture do the rest of the talking. 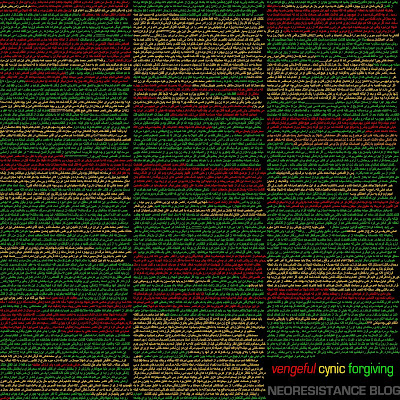