One wouldn't expect that the official Iranian News Agencies be reacting to the passing of a bisexual British artist. Indeed IRNA and ISNA didn't,  but the most conservative news outlet in Iran, FarsNews, did.

Fars News even sounded revealingly about the timeless artists:  "Davie Bowie, the famous British musician passed away." "According to the music reporter of the Fars News, David Bowie, the famous musician, singer, composer and actor who had a remarkable impact in in Rock music world, dies after a long struggle with Cancer, at the age of 69." It then refers to the 2002 ranking of David Bowie in the chart of the 100 great Brits (29), and Rolling Stone's top 100, 39, and the 100 greatest rock singers (23). 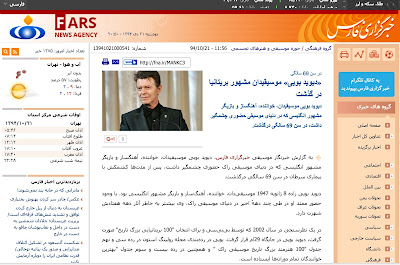 ILNA, the Labour's reporting agency is also covering the news with the title
"The legendary David Bowie passed away". It talks about Bowie's "peaceful death after a courageous battle with cancer" and introduces the album BlackStar, which was released on his birthday on Friday and was met with critical acclaim. The report then provides a quick biography, refers to the same rankings as Fars News and ends by referring to Bowie's fashion and hairstyle as an important inspiration to the wolrd of music. 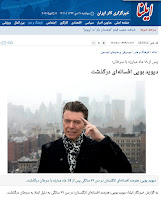 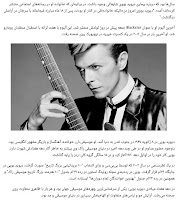 And here, the official news agency Mehr News doesn't assume that someone may not know DAvid Bowie, and titles: "David Bowie Passed away at 69." 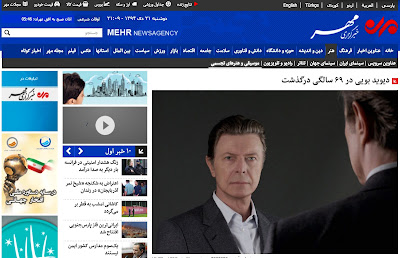 
Investigative reporter Robert Parry broke many of the Iran-Contra stories for The Associated Press and Newsweek in the 1980s.

In a recent exclusive for the Consortium News, he writes:

For generations, U.S. officials have averted their eyes from Saudi Arabia’s grotesque monarchy – which oppresses women, spreads jihadism and slaughters dissidents – in a crude trade-off of Saudi oil for American weapons and U.S. security guarantees. It is a deal with the devil that may finally be coming due.

The increasingly undeniable reality is that the Saudis along with other oil sheikhs are the biggest backers of Al Qaeda and various terrorist groups – helping these killers as long as they spread their mayhem in other countries and not bother the spoiled playboys of the Persian Gulf.

Will Official Washington’s dominant neocon/liberal-interventionist claque continue to protect the Saudis who have built a regional alliance of convenience with Israel over their shared hatred of Iran?