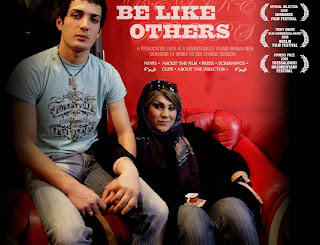 TAKE ONE In Iranian director Tanaz Eshagian's Be Like Others, fear hovers over a whole nation, leading to schizophrenic behavior. By concentrating on three different individuals before and after they went through sexual reassignment operations in Iran, Eshagian reveals an incredibly sad and asphyxiating society — one where homosexuality is banned and punishable by death but changing one's sex is legal.

Eshagian's project is exceptional because it leaves the viewer enlighteningly confused about Iranian attitudes toward gender and law. The most fascinating character in the film is a transgender woman dedicated to the care of patients in transition. She is supportive, devoted to her patients' well-being, and fully entrenched in the traditional Iranian views of men and women.
Posted by Naj 6 comments:

Tim Russert will be missed ...
this is a sad day for American politics
And a happy day for political crooks!

The previous post spawned a little discussion between divajood and I.
Pedestrian joined in and produced a very passionate post; asking the good folks of the White/Zionist/"civilized" world a few lovely questions:


I'm not ready to make nice ... why would you understand it when some bigot attacks your country singers ... and not when we, the men and women of the Middle East cry it:

I'm not ready to make nice!
Posted by Naj 2 comments: