Update: I have been trying to catch bits and pieces from these 250,000 cabels, and one thing that is becoming increasingly clear to me is the RACIST media spin, which is trying to divert the damaging attention from the US department of foreign affairs and instead scapegoat the "dubious Arabs" and the "dangerous Persians" ... all concerns I expressed a few hours ago before North America woke up are becoming more justified. There seem to be a concerted effort to demonize Muslims (Arabs) and through their eyes, justify a war against Iran, selling it as: "see it is not only Israel who is afraid of Iran; all the neighbors wanted bombed too" ... clever Zionists, huh? Well we are more clever than you!
End of update

Initial reaction
Well well, my facebook world is flooding with angry and nationalistic messages about the recent Wikileaks: Saudi Arabia urging a military attack to stop Iran's nuclear ambitions.
My initial reaction, especially when I read: "From Israel, Mossad Director Meir Dagan summed up the sentiment of Arab countries that favor an attack, saying that Saudi Arabia and the Gulf States feared Iran, but wanted someone else "to do the job for them." was that someone is aiming at a rift in the Muslim world.
And then came concerns of Robert Gibb, that such as these leaks are undermining the plight for democracy and worsen the human rights situation in Iran. This concerns, coming from Robert Gibbs the White house spokes person made my brows hit the ceiling: "what the Eff??" THIS HAS NOTHING TO DO WITH IRAN'S DEMOCRATIC MOVEMENT!!!!
To link ANY policy regarding Iran's nuclear program to the Green movement is TOTAL hypocrisy of Mr Gibb, especially in the light of the following leaked piece of information:

¶7. (S/NF) Regarding the recent election in Iran, MBZ (Sheikh Mohammed bin Zayed al Nahyan ) cautioned that Mir Hossein Musavi is no different than Ahmedinejad when it comes to their nuclear ambitions, 'same goal, different tactic.' In this respect, he regards Musavi as more dangerous than his competitor, as at least Ahmedinejad was 'an open book.' He reminded Secretary Geithner that Musavi and his advisors are part of the same group that took the U.S. Embassy in 1979.
Source: (http://cablegate.wikileaks.org/cable/2009/07/09ABUDHABI736.html)

A few minutes after all these reports, a Saudi Arabian friend of mine sent me a little message. If you are curious what Iranians and Arabs think about this, am copy pasting our little exchange about this issue:
The Iranian Naj:

I WOULD BE VERY CAUTIOUS ABOUT THIS, CASHING ON ANTI-ARAB SENTIMENTS OF IRANIANS ... KILLING A FEW BIRDS WITH ONE STONE

The Saudi Arabian friend of Naj:

While I agree with you... and believe that stoking such ethnic tensions could be in part behind this... I hope most people realize that there is a difference between the actions of governments in the middle east and the feelings of people. Most Arabs I know have very little direct contact with Iranians, the exception being Iraqis. Almost all the Arabs I know, which does not represent them all obviously, feel identified with the Iranians as a people and sympathetic to their causes. I am sure that news like this, if they believed it, would anger them about their own governments.

The problem is that we Iranians know very little about Arabs and have seriously distorted stereotypical notions that can easily get ignited by documents such as this. I think the problem needs to be understood from two angles:

First, that the Arab governments harbor hatred for the Iranian one is not necessarily untrue. Iranians need to understand WHY that is. In my view it s because Iran has a more vocal and more dynamic pro-democracy movement, compared ot other countries of the region and this unsettles the Arab governments.

Second, that which is referred to as "arab street" does aspire to the Iranian model, and this not only unsettles the arab governments, but the scare-crow, Israel. However, reports such as this exacerbate the anger of the pro-democracy Iranian activist, who used to fight shoulder to shoulder for Palestinian rights but are recently let down and dismissed by their fellow Arab activists who have branded their movement as an American interventionism, turning a blind eye to the HORRENDOUS violations of social, civil, and human rights of Iranians.

Reports such as these, therefore also undermine the Iranian green movement, and give the Iranian government extra excuse for putting the screws on all Iranians.

So, the bird flock is killed indirectly:
I think over all, the outcomes of such leakages CAN be positive if people put their nationalistic "reactions" aside, and sit to think of the implications of these and how one can reap benefits from such reports. How one can change the course of history. My fear is that most people don't take time for that, and the cycle of hatred, misunderstanding and retardation will continue."

Of course, I am wondering why no one has mentioned Haaretz piece on the not-leaked, rather by-Pentagon-published documents about the Tipped Kettel Operation: The truth about Israel, Iran and 1980s U.S. arms deals.
Posted by Naj 9 comments:

Censoring an Iranian Love Story, a self-reflexive satire about the IRI-imposed postmodernism of the contemporary culture 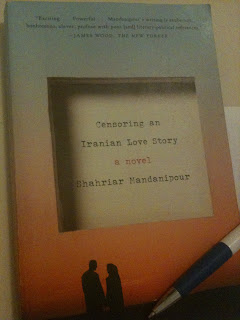