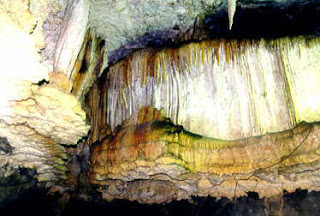 Ali Sadr Cave is a cave located about 100 kilometers north of Hamedan in western Iran .The cave walls can extend up to 40 meters high, and it contains several large, deep lakes. 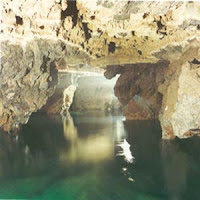 The cave has a river flowing through it and most travel through the cave system is done with a boat. Ali Sadr cave is situated between the large cities in Hamadan, Tehran and Qom making it a popular destination for Iranians. The cave was originally discovered during the reign of Darius I (485 BC) which can be verified by an old inscription at the entrance of the tunnel. This is the only cave open to tourism in Iran and according to IRNA it attracts 300,000 visitors per year. A German/British expedition of the cave took place in 2001. 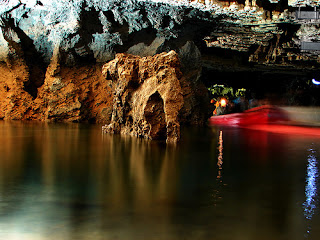 The German symphony orchestra will play classics by Beethoven, Elgar and Brahms in Iran this week — a rare visit from a European ensemble amid political tensions between the Islamic republic and the West.

The 60-member Osnabrueck Symphony Orchestra, led by conductor Hermann Baeumer, will arrive Monday and perform Wednesday and Thursday in Tehran as the return half of an exchange that saw the Tehran Symphony Orchestra perform to a packed hall last year in Osnabrueck. read more ...

This is the second time in two months that I get stuck in Chicago! And this time around, every thing that could go wrong did!

For the first time, my Iranianness became an issue; and I was subject to gender based comments which I am planning to take up with a court. ("Oh good, I get the pretty one", said the homeland security half-retard agent, as they separated my husband and I to speed up the "tagging" process!) As a result, I had added stress of running around in that mad airport!

Then the tornado hit. Twice. Once when we were about to board. So they evacuated terminals, fearing flying glass, as the water was pouring down the ceiling! Second, when we were waiting to take off, and they had to evacuate the tower, thus cutting off our plane from communication. Thank goodness for cell phones; and for the movies I could watch in the three hours we were on plane until they told us the flight would be canceled.

And once the flight was canceled, we were left on our own: rebook your flight yourself, book a hotel yourself! Neither an easy deed! Two days of O'Hare shut downs and a long backlog of stranded passengers. Hotels were either fully booked or had lost power.

Staying up on a chair, however, gave us a good view of the lack of efficiency with which O'Hare operated. It seemed like an over-staffed airport, with excess laziness and overwhelming LACK of enthusiasm! Listening to the conversation of a couple of flight attendants who were stranded and left hotel-less was quite interesting. For 12 hours, America was marching in front of us.

In any case, as much as I dislike Chicago, Madison, Wisconsin was a little jewel. Only if it weren't that far, I would see myself living there. But I have the Tehran bug and I need noisy cities to be happy. Next time I go to Madison, I won't fly through Chicago. (That is not to say that the Northwest Airlines and Detroit are better, as I have been stranded there as well. But O'Hare beats all of my airport disaster stories.)

Now what is new?
Posted by Naj 34 comments:

The 8th Return of Cartoonists to Iran

If you are talented and interested, apply by October 22, 2007

(The cartoon to the right is by Angel Boligan from Mexico.)

Here's a little history of cartoon in Iran.
Posted by Naj 7 comments:

A Lesson for the King But did you know that Iran exports half a million dollar worth of flowers per month? I did not! I didn't even know that Tehran has a flower market! However, everytime I am in Iran I am astonished by the low cost of the most glamorous bouquets that the flower shops (virtually present at the corner of every block) offer.

Currently, the Arab states in the Persian gulf are the primary customers of Iran's flower, but South Asian and European markets are being explored.

This is not about restriction, nor segregation; it's about safety and creating economic opportunities.

Watch this video, and see for yourself how such services help women navigate their way into the social sphere! CNN also has a little clip on this. But as usual they spin it wrongly!

In any case, another evidence that Iran's Amazons are taking charge :) 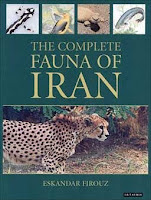 If you like ecotourism you might be interested to know that "Iran is host to some of Asia's most diverse animal wildlife. Its Caspian coastline, arid central deserts and fertile plains are the habitat for a vast range of creatures."

This prize-winning book is the first and the only comprehensive work on the fauna of Iran, by Eskandar Firouz--a former Director of the Department of the Environment in Iran.

An Iranian-American in Iran (1)

I hear things have changed since then; the gas is rationed, the dress code toughened, the US-Iran tensions worsened, the prices heightened, the students burdened ... 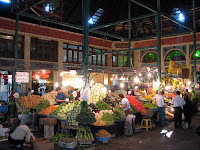 Instead of hiding my head in the sand and sulking, I am going to look for stories from people like me who are in Iran. This story by Nina Farnia is the first of this series.

Farina is an Iranian-American single woman in Tehran. A casual encounter with a man on the topic of grocery shopping motivates her (Tehran Avenue) story in which she ponders about Tehran's encounter with globalization:

Yesterday, I was walking in Park Shahrara in the early afternoon, and saw a man carrying a bushel of sabzi khordan. Sabzi khordan is hard to find in the afternoons during the summer, unless one is an early riser. I stopped the elder. “Sir, where did you get that sabzi?”

“I bought it this morning at the fruit stand across the street, put it in the fridge at work, and now I’m taking it home. Take half of what I have here for yourself,” he responded.
I, an Iranian from the U.S., was shocked that someone would offer me half of his own. I immediately responded, “No thank you sir, I’ll find my own. Thank you so much.”
But he kept telling me to take his. “Please, take half of mine, you’ve been at work all day too, haven’t you? Take half of mine.”
I, of course did not take his sabzi, assuming I could find my own. My Americanness would not allow me to accept someone else’s offerings.
I have been in Iran for a month. From every direction, young and old, rich and poor, I sit and listen to stories describing how horrible post-Revolutionary, post-War Iran has become: “There is no more safety in the streets”; “Everything has become too expensive.” Complaints about the government, President Ahmadinejad, the dirty Tehran air, the rising gas prices, the packed metro, the lack of opportunities for young people, these are all never ending. Keep reading ...

The Anniversary's coming up! On 6 August 1945, a number of eyes in the Japanese city of Hiroshima turned skyward at the drone of a US B-29 bomber flying across the cloudless sky, accompanied by two other aircraft.

Has any American ever felt any shame that this country was the first to massacre indiscriminantly with their jolly new nuclear technology, brought to fruition by the Nazi('s) scientists who were lured by America?

Is any American ashamed at the ease with which America is discussing the possibility of using the atomic smart bombs in this new version of the world war? Discussing? My no! Hillary thinks Obama's childish to think a president can avoid them!

America's German inheritance is in fact interesting and significant; is it not?

Perhaps we should dig deep to understand why our Western democracies fall so frequently on this same shameful path ...

P.S. Well, there is a lot of great information in the comments; most of which, somehow reaffirm the point of this post. There seem to exist a consensus that the A-bomb is not a BAD thing and it can be beneficial; and that America's doing the world a great favor by developing and using its weapons! Some suggest that America's A-bomb saved Japanese lives because the EVIL Japanese government was training all these kamikazes to defend their country to death! How dare any government asks its population to fight for their home? America needed to go and bomb two little cities to teach Japanese to surrender immediately so it saves more lives. Sweet little Truman!! Well no wonder the world is in such a state of chaos!!!
America's philanthropy is quite remarkable: it has also saved a lot of Vietnamese and Iraqi lives from EVIL communism and Evil Saddam!!
(Democrat's hands is/will be just as blood stained as the Bushists's. Because, this is America!!!)
Bravo America!

Post PS. Unintentionally, my post script above seem to have offended a few of my friends. I wish to apologize to those who consider my rhetoric an offense against America, the country. I wish to clarify that the point of this post, and the conclusion at which I arrived in the post script, is begging the question of our relationship to technology and our philosophy of war and our attitude towards warfare. The finger pointed at America is pointed at our collective post WWII culture. We have too easily blamed the bulk of the WWII on Nazis of Germany, without completely and coherently examining that which we (no matter in which corner of this world) have shared with them prior to the war; and what we continue to share in terms of philosophy.
If you ask me who won the WWII, I would say America. But, has the conqueror faced herself in the mirror of reality? And, has the conqueror wondered about the ways in which it has contributed to the rouge attitude of many other nations that are merely emulating an American paradigm of powerplay? The main question of this post is, how has America contributed to so many nations pulling out from the non proliferation treaty?

I personally think that, had America declared national shame about the atomic explosions in Japan, had it declared "never again", had it been genuine about its advocacy of peace, the world would have had a more respectable model to follow. Our historical revisionism provides factual explanations for our deeds, but by posing as objective and scientific, it depletes our subconscious from a genuine faith for peace.
Posted by Naj 27 comments: