War-profiteers who donate to "United Against Nuclear Iran"

Salon has just turned in a piece of investigative journalism, drawing attention to a likely link between the former US diplomat in the UN, Mark Wallac (who is the current executive director of UNAI) and the billionaire Thomas Kaplan, the proponent if speculative investment in precious metals. Salon's piece suggests that these groups profit financially from increasing tensions between Iran and the world, and are betting on a war to cash their investments.

I have been perplexed by a lack of mentioning of the name Iran, in all ping-pong allegations between Israel and Hamas; and who is funding who and is colluding with whom. Today, I saw FP pointing at Saudi Arabia and Turkey as US allies who also fund Hamas, but again no mention of Iran.

Some speculate that the recent war on Gaza, to be more precise, Natanyahu's defiance of international law and world  opinion on his immoral and illegal actions, is a sign for imminent war with Iran.

But, as I have often maintained, Iran and Israel will not fight each other, nor will they fight Saudi Arabia. They will continue to fight proxy wars as they do now. And an example of the way they fight each other at the present moment can be sniffed from an editorial piece in IRNA:

(Translation by Naj@neoresistance, free to use with permission.)

According to Parsineh:"After the ISIS attack on Iraq, the core argument pursued by Saudi Arabia, Turkey and international media implied that the conflict in Iraq was not an internal affair, but a full-blown global war between the Sunni and the Shiite which would eventually engulf the entire region beyond Iraq.

However, with Israel's callous attack on and apparent genocide in Gaza, the equation has suddenly changed. ISIS, which had succeeded in presenting an anti-Shiite image of itself to the Sunnis of region, a strategy with which it had made a few strides in Iraq and Syria, remained silent about the genocide in Gaza. Gazaners are Sunnis, and if ISIS was genuine in its claims, it ought to have condemned the atrocities against the Gaza Sunnis in the least.

On the other hand, it was Lebanon's Hizbollah and the Islamic Republic of Iran--accused of creating the Shiite crescent by ISIS--who rushed to aid Gaza and stand with the people of Palestine and Hamas Islamic resistance, despite the fact that Hamas and other fundamentalist arabs are fighting against Bashar Assad in Syria.

With this account, we can say that the Gaza war had two big losers.

First, the occupying Israeli regime who could not achieve its goals and had to retreat even more infamously in the public opinions as child-killer; and second, ISIS who was to sizzle the bloody Sunni-Shiite fight in the Middle East.

The blood of Palestinian martyrs has bound the Sunni and Shiites, and has blocked the blood bath that was planned based on religious slogans. 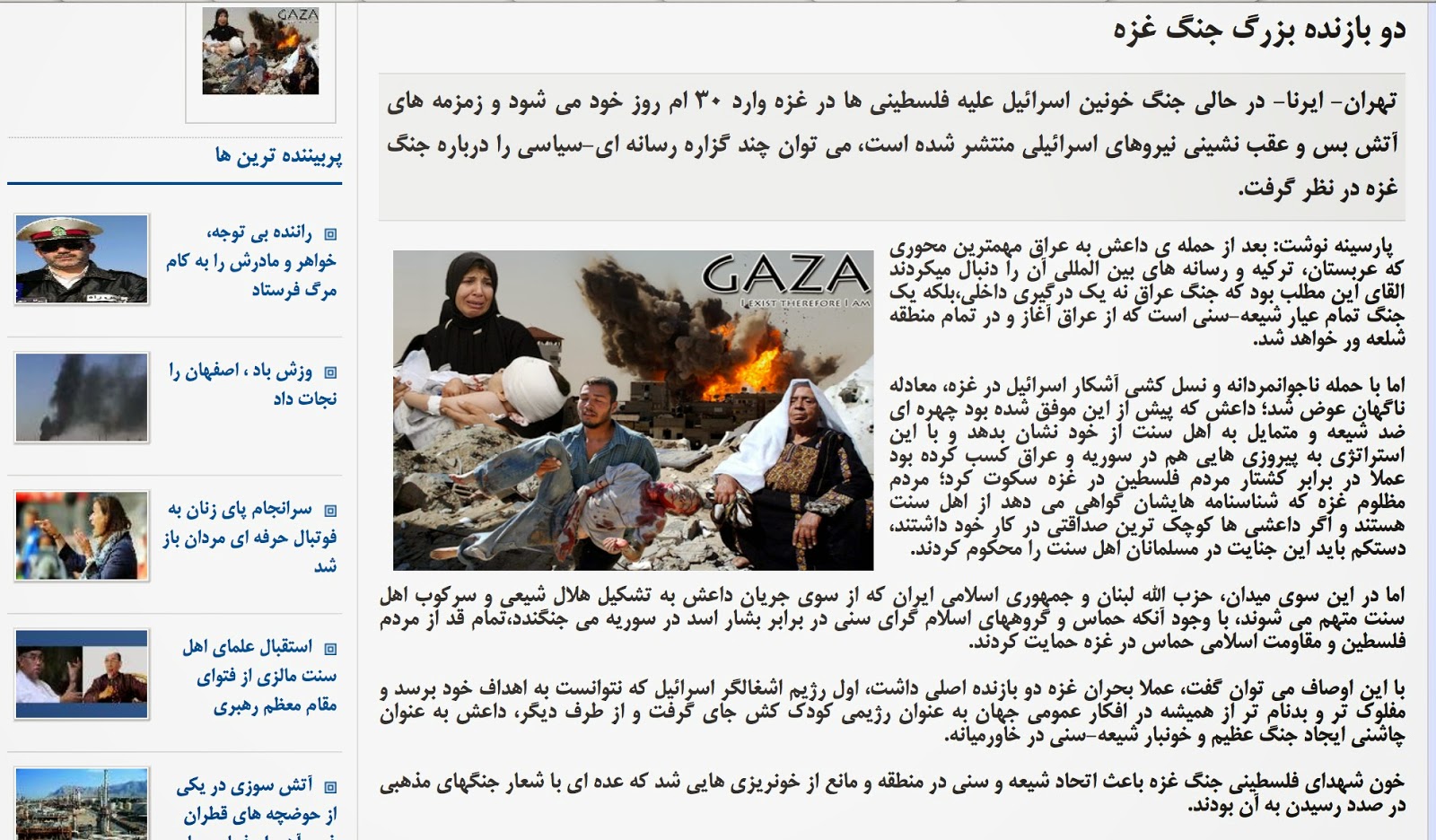