When the despots' media dig their grave for them ...

At this moment, I wish to do something other than this. If you have come here, you are perhaps looking for updates about how the protests in response to the kidnapping of Mousavi and Karoubi went. You are perhaps looking over the Internet for 'exiting' images of people confronting the Basiji thugs or the riot controllers. You are perhaps hoping to hear big crowds shout "Down with Khamenei". You are perhaps holding your breath for drama to unfold, a revolution to break, so you can get glued to CNN for a few days, wear solidarity flags, circulate the images and the songs of Iranian youth demanding democracy.
But, don't hold your breath. It is not going to happen. The reason is not because the opposition is not out there. The reason is because the Iranian regime has SUCH A TIGHT control on communication, that no one dares uploading pictures via IP addresses. Those who are caught doing such acts are given death sentences with charges of corruption or espionage. Fair enough, if you ask me what is the basis of this claim I am making.
Well, the proof is in what Raja-News, the Presidential news outlet has put out today. Because these sites have become very mercurial, and remove the source reports depending on who catches their bobo, I always take a snapshot of their screen. For posterity.
Voila, here it is. I translated it below the picture.
For those of you who have the slightest of doubts about the "seriousness" and the "size" of the green movement, just ask yourselves, WHY is such a 'mighty' government so scared of a few insignificant "bacteria" (as Khamenei called us) and "Dust" (as ahmadinejad called us).
No, you won't see any pictures coming out of Iran, because this open and global-managing government is SCARED of images, is scared of journalists and independent reporters. Read the translation below to become familiar with their journalist ethics and practices. And stop being willfully ignorant, if you think every thing in Iran is hunky dory and all this is just "zionist" propaganda! For all this to be propaganda, Mousavi and Karoubi have to send out videos in their homes, surrounded with their friends and families. 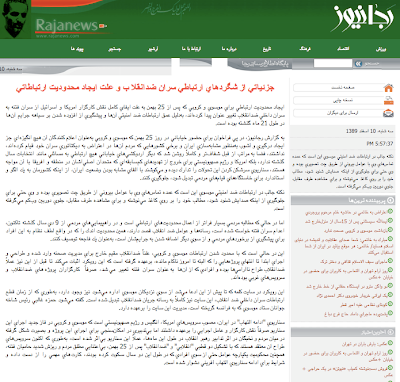 In this recent blunder of the Gobbelites, Raja news is publishing "details of the communication tricks of the anti-revolutionary leaders" in order to explain "why they are put under house arrest". (Today, there were quite a few contradicting stories coming from various sources in the government, trying to deny that Mousavi and Karoubi are transfered to a military prison.)
So this is their justification: (it is SO HARD to translate this text that is written by obvious illiteracy, so if it is hard to read, blame it on the original! I have already improved it much with my translations, they should thank me!)

"The communication restriction for Mousavi and Karoubi, whose description after February 14, has changed from "heads of conspiracy" to "internal anti-revolution leaders"--due to their role in executing the American/Israeli plans[!!!!]--has been due to the depth of their anti-security communications, and for preventing the further thickening of their crime file over the past 21 months.[!!!!!, how kind of them, they are just preventing Mousavi and Karoubi from further crimes!!!]
According to RajaNews, after calling to street protest on Feb 14, Mousavi and Karoubi who had no intention but creating tension in order to simulate in Iran an uprising like in countries where people had revolted against their dictator leaders, the atmosphere has become more clear, and it has become apparent that these street postures have no relation to matters such as last year's election. Rather, America and Israel have schemed it in order to find an exit from the unprecedented threat that their allies in north Africa are facing, and break the developments by pretending that Iran's situation is similar, in order to prevent Iran from becoming a model for the outcome of popular revolutions. [I have no clue what the idiot was thinking when writing this, defies logic!]
What is interesting in the contra-security communications of Mousavi is that some of his contacts with external elements has been via video chat; and he, in order to circumvent being wiretapped, he wrote his statements on paper and held in front of the webcam. [so here, they are admitting that Mousavi was wiretapped and was spied on. Nah don't expect a Watergate in Iran!!!!]
While the demands of people are much further than restricting their communication channels, and in a rally (9 Dey) January of 2010 until now they have demanded execution of these conspiracy leaders, the media and the counterrevolutionary sources are trying to pretend that even this minor restriction, which is in fact the mercy of nezaam (regime) bestowed upon these people to prevent them from being confronted by the people [i.e. those who want to slit Karoubi's throat--see previous posts on that], and from increasing their crimes [did I thank this thoughtful, kind and gentle Nezaam before??!?!?!], is a major calamity.
In the meantime, with restriction of the communications of Mousavi and Karoubi, the external counterrevolutionaries have directly entered the field to manage the plot that from inception to date has remained without results. This proves that even before, the counterrevolutionaries have been the designers of this unrest, and people who were called the heads of conspiracy were just mercenaries of anti-revolutionary projects and Western services. [Wow, genius!]
This trend is also present in the Kalemeh web site that until now was claimed to be run by Mousavi's confidants; such that since the communications of the heads of conspiracy are limited, this site has completely turned into an anti-revolutionary medium. It is said that Hamzeh Ghalebi, who was the head of the youth wing of Mousavi's campaign, has fled to France and manages this site. [Fled? Why? scared of you goons?]
The scenario of "continued tension" in Iran, is written by American, British and Zionist agencies and Mousavi and Karoubi have been the executives of this plan [this is when I think Lacan will have a field day, psychoanalysing Ahmadinejad's self-reflexive camp]. However their negligence in feasibility assessment for executing such plan amongst the people and the elite, and under vision of the revolution leader [I thought the revolution leader was Khomeini who died, after 32 years these people are still in a state of revolution?] in the past few months, this scenario is neutralized such that the designers of this plot believe that with the polarization of people to "revolutionary" and "counterrevolutionary" [again what we warn these goons what, you are with us or against us] after Feb 14, absolute neglect of the people [of the Feb 14 event], and major collapse amongst the supporters of conspiracy [refers to Hashemi, Rowhani, Motahari and other pseudo-greens who came out and condemned Feb 14 protest, because Ahmad Khatami and others threatened and gave them less that one week to be with them or against them], even condemnation of them by people who had been silent over the past two years [i.e conservatives such as Mohsen Rezayee and Ghalibaf], they have lost important cards and the conditions for continued tension has become difficult. [!!!!]

End of report.
[No this is not an opinion piece, this is a "news" item. and since it is not expressed with neutrality that a news journalist is bound to, I have annotated it!]
Posted by Naj

these assholes cannot even stick to one story!

Jafari denies Mousavi and Karoubi are arrested; Larijani says he will prosecute them.

Jafari says he won't do anythign about Faeze attackers unless she complains, Larijani says he will pursue them!

Stupidity OOZES out of this regime. what a SHAME.

Ah, someone else catches them too