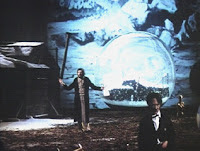 "It is easy to understand the revolt of slaves but difficult to comprehend the evil of tyrants." Hans-Jurgen Syberberg
A few years ago, as the Americans were gearing up for Iraq, I saw one of the most extraordinary documentaries of my life: Our Hitler: A film from Germany (1977).

The reason why I thought of this post is Wally's introductory course to Neoconservatism:

Neoconservative is a commonly misunderstood word. It has been around since the 1800s, and it's meaning has changed many times. It was started by liberal Democrats who were unhappy with some of the stances of the Left. It picked up momentum in the Goldwater years, on through Reagan, Bush41, Clinton, and Bush43.
...
It has become a well-embedded myth, that: Liberal=Democrat; Conservative=Republican; and Neoconservative=Conservative.

Neocons are faithful only unto their own fascist ideology. Power and world domination is their goal. They gather under the banners of Democrats and Republicans alike. This is the reason the Republicans are pushing hard for Hillary Clinton. Remember what they did for LIEbermann? The MSM has already given her the 'annointing' as the Democratic Presidential Candidate. It's a win-win situation for the neocons. Neocons aren't that interested in 'which' party is in power, but 'who' that person in power is."

In his epic film, Hans-Jurgen Syberberg's (a historian as well as a filmmaker) reflect on Adolf Hitler, the cultural mechanisms underlying his mythic rise, and the effect he continues to wield over Germany. The problem that film raises, chills your spine, when you realize how similarly the history is repeating. This is how the circus starts: 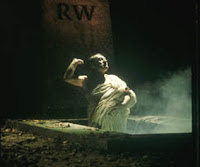 "Ladies and gentlemen,
now that we're rid of the Kaiser and God -- off we go.

The Song of Songs, the greatest story ever told. Let's give him his chance, let's give ourselves our chance. Taboos, this show's about taboos. The greatest show of the century, big business, the show of shows ... No human story, but a history of humankind, no disaster film, but disaster as a film. The end of the world. Deluge, the cosmos biting the dust."

"Hitler: A Film from Germany is an attempt to divorce Hitler and the Third Reich from a simple narrative and historical summation through a marriage of the Wagnerian Gesamtkunstwerk and the Brechtian alienation effect, an unlikely alliance but a profitable one: Film as the art form of the 20th century, the epic theater providing its principal dramaturgical devices."

"Syberberg is using puppets to represent the third Reich leaders in his film. ... I believe that this representation is beyond the scope of the theatrical experience. The historical figures become mannequins of the different uses of society. They have lost their individualism and became actors in the theater of history." 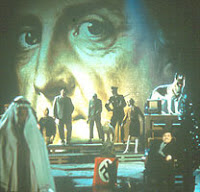 It is not a coincidence that after almost 25 years of obscurity, the film is being released in DVD format only recently.

I think at this time in our political life, we need to be aware of who the Neocons really are. Far too many people are under the impression that Neocons are Republican only. The movement is, in fact, very bi-partisan. We must take the extra time to 'follow the money', and see who is indebted to who in Washington.

Also, thanks for comparing me to the pundits at PBS. Had you said Faux News, I would have been highly insulted.;)

the Barefoot Laborer (aka: Bijan)
I’m so sorry Naj and my comment may be so moot! I’m sorry because I don’t GET the significance of this movie or the purpose or intent of this post. Are you saying somewhere, someone, some group, or some political party or some members of some political party in some country is promoting and glorifying Hitler and Nazism or a similar faction for a new world order?
Please explain if you don’t mind ;)
Do I dare to see these in the same vein? How about Mel Brooks’ works such as The Producers and these hilarious (well, for him no doubt) Youtube segments such as Springtime for Hitler and Hitler Rap.

It's really about power and the enslavement of the people for the corporate elite.

One day soon America will fall and that day is getting closer and closer as they push World War III.

I hope and pray that it can be stopped otherwise the Death and Destruction that will be unleashed against mankind may spell the end of the World.

The difference between Adolph Hitler and Adolph Bush is Bush will not be stopped, Hitler was.

Naj--
It's DEFINATELY global. Some examples are Alan Greenspan, now working for the Bank of London, and when Bush tried to set up Wolfowitz with the World Bank.

Most of the American Neocons are under the sad illusion that they will be the ones running the show. They are only doing the 'grunt work', as when things are finally in place, the Zionists will step in and take control. Like the old saw says, 'What goes around, comes around', and the American Neocons will understand the full force of that statement when that day comes.

OH MY, Naj! I saw that film in Quebec City when it came out! It's one of those films that, like Günter Grass' Le Tambour, once seen, never leaves your consciousness - ever! I am definitely downloading it. Thanks ever so much!

BTW, I just discovered a new Iranian blogger via Antony Loewenstein's blog. You may know of him.

Gene, you are very welcome.

You know, when downfall came out, I thoought it was a miniature cartoon immitating sieberberg's intention!

But this is FAR more universal.

As oposed to that STUPID move, downfall, that put a "human" face on hitler. This ne is putting a "puppet" mask on him. Which a a FAR more accurate depiction of history!

I wish everyone here watches it!

Thanks Gene, I know kamangir's blog!

It's not left a lasting impression on me. :)

Anybody who thinks we can vote these creeps out just doesn't know.

Our votes are Uncounted.

how about the Pelosi sheeps, did you not vote them in either? Where is their principle?


In case you want to learn something about it, start with an American journalist who has to work OUTSIDE HIS COUNTRY in order to tell the truth about what goes on inside his country.
Get off your high horse and read some books by Greg Palast

Or watch a movie: Hacking Democracy

This is what you get when you ask a politician in this country (John Kerry) why he didn't grow a set and make sure the votes that would have won him the election were NOT counted. complete taser incident

Kerry or Pelosi are NOT what Americans would choose if they had REAL choices.

The BIG corporate money chooses, grooms, injects huge amounts of campaign contributions into and presents them to the American people.

Why is the Media Downplaying Our Voting Scandal?

We hold our nose and wonder if even this stinking choice will be counted. And the rest of the world lazily glaces over a few American Corporate funded media sources and proclaims the entire American electorate to have the IQ of an acorn squash.

ps your movie isn't even a real documentary according to the wikipedia entry you linked to.