What Is Hegemonic About Iran? (CIA factbook) 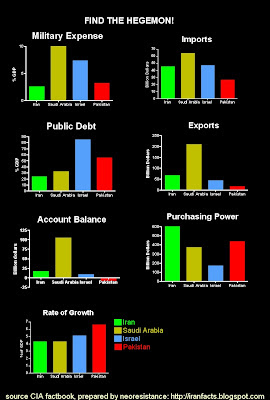 Please be sure to compare Iran's military expenditure to that of Saudi Arabia and Israel. Also the public debt!

Paul Krugman put it this way: "we're talking about a country with roughly the G.D.P. of Connecticut, and a government whose military budget is roughly the same as Sweden's" ("Fearing Fear Itself," New York Times, 29 October 2007).

Where's the chart for how many box cutters they have?

Good info, Naj. Thanks for posting it.

Good one, Naj. I don't believe any sane person with a good grasp of vocabulary would call Iran 'hegemonic'. In todays world, there is only one nation that would deserve that title. Well, two, if you count Israel, but they can't do it on their own.

Another excellent tool of information Naj.

Thanks for your kind compliments (but I am not at all war loving!) Expenditure aside, threatening Israel and indeed the world with nuclear weapons is unacceptable.

Ahmedinejad can deny or denigrate or do whatever he will to the memory of the Holocaust, but the truth and fact remains that it has left an indelible fear of anihilation in the heart of every Jew.

Today the State of Israel can do something about it. The regime should take note. As I've stated before, for all my love of Iran, and it really is sincere, I am in favor of stopping the regime's atomic program at any cost.

Incidentally, if this isn't the post you had in mind for me to comment on, feel free to paste the link directly into the comments section on Skye Frontier.

you are being fed a false "terror". I understand that digesting this "terror" is what Israel gets its metabolic resources from. But eating too much junk food, has messed up Israel's digestive system! also it's Homeostasis.

To release its pressure with a big "gas" will just stink up the world, and create a new generation of paranoid schizophrenics across the universe.

Nice, Naj. Will cross-post. I do have one question, though: how can Israel's accounts balance be positive if it has such a negative balance of trade?

The Saudi King has a audience with Her Majesty, Fisk is almost as livid as I am

You have a very nice blog!

Hmmm, i will skip the Saudi figure, Cash-Tumored by oil prices as usual, and focus on others

I am not sure what is (Purchase Power refers to but, usually it means the Purchase power of individuals (so i don't understand the Y-Axis Billions refering to !!)
But a higher purchase power to local Iran refers to the burden of governmental-supported fuel prices that keeps every thing prices low, but very negative impact on the Budget & Investment on long term ((Very Dangerous Sign))

Actually you can go to the CIA factbook and see exactly what those numbers mean.

The Purchass power is the amount of liquidity that the state has to "purchass" stuff. The high oil price is reflected in that.

I don't understand the economists arguments well, as I am quite illiterate when it comes to this field of knowledge, but I know Ahmadinejad is under fire, and that Iranian economists are warned about the oil surplus, whatever that means.