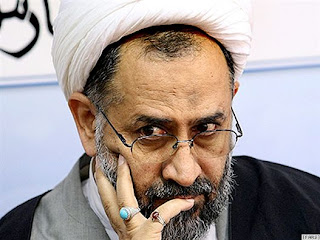 (Here's the list in Persian!) Please help me with names I have never heard; I put them in brackets. If you also provide hyperlinks I'd be grateful (please be sure to see comments. THANK YOU FOR ALL YOUR INFORMATIVE COMMENTS & CORRECTIONS ... ). I guess this gives me an opportunity to learn about "who's afraid of Virginia Wolf" :)

In addition to these 60 (notwithstanding the repeated items), cooperation with VOA, BBC, Radio Zamaaneh, Radio Farda, Radio Israel; plus collaboration with satellite stations of anti-revolutionaries such as MKO, Monarchists, Paris (what's this?], Rangarang, Canal One [what's this?], and internet sites such as Jaras (Green Path) (the only remaining news outlet of Iranian protestors) is considered illegal!!
Posted by Naj

One of the many relevant long-standing committee/commissions of the German parliament, always consisting of a political cross-section of Members of Parliament/MPs.
»The Committee on Foreign Affairs is a committee privileged by the constitution, since it is one of the four committees that are provided for on a permanent basis by the Basic Law. […] it oversees the government’s foreign policy, above all in the run up to important foreign and security policy decisions.«

[my personal commentary here:
The members of this German parliamentary commission will hardly be overmuch amused, if they were informed that they are considered by the Iranian state to be the pronounced foes and would-be-overthrowers of the present Iranian government]
http://www.bundestag.de/htdocs_e/bundestag/committees/a03/index.html

I think that #49 may refer to MEMRI (Middle East Media Research Institute), although they use a different spelling on their website...
http://www.memri.org/

#37 could be the "International Centre for Democratic Transition" http://www.icdt.hu/
(although they have nothing on Iran on their website...)

It is bad for the iranian regime, because they will quickly lose support from european companies.

They can not do business when iranian people are killed. Europe would lose all credibility if it would allow Iran to slaughter its people - how could you prosecute war criminals in Den Haag but you allow torture and murder of the iranian "government" while european companies do money laundering with Iran?

Even turkiye with all its internal problems is 100% more civilized than the current mullahs in Iran.

Number 12 could be Netherlands Institute of Human Rights (SIM).

Thank you all SO MUCH. I am going to update the post with all your suggestions. It is indeed an educational experience.

12. Dutch Institute?
There's a Netherlands Institute for Multiparty Democracy http://www.nimd.org/
"These centres provide a neutral setting where political adversaries have the opportunity to discuss how they can work together to strengthen democracy."

14.United Nations of the US?
UNA-USA http://www.unausa.org/about
"The United Nations Association of the United States of America is a nonprofit membership organization dedicated to building understanding of and support for the ideals and vital work of the United Nations among American people. Its educational and humanitarian campaigns, including teaching students in urban schools, clearing minefields and providing school-based support for children in African communities that have been hurt by HIV/AIDS, allow people to have a strong influence at a local level."

16. English Wilton Park
http://www.wiltonpark.org.uk/about/index.aspx
Wilton Park Conferences "cover the key political, security and economic issues confronting the world. Global concerns such as the environment and terrorism are also addressed, as well as issues such as social reforms and the impact of the information revolution."

17. There's an organization called, "Common Good: Restoring Sense to America" (http://commongood.org/), but this is more likely Search for the Common Good (http://www.sfcg.org/).
"A leader in international peacebuilding"..."Founded in 1982, Search for Common Ground works to transform the way the world deals with conflict..."

18.
Committee on Population/CPOP: http://www7.nationalacademies.org/cpop/About_CPOP.html
Founded to "conduct scientific assessments of major population-related issues and to provide a forum for the discussion and analysis of important public policy issues related to population."
or
The Population Council: http://www.popcouncil.org/
"An international, nonprofit, nongovernmental organization, seeks to improve the well-being and reproductive health of current and future generations around the world and to help achieve a humane, equitable, and sustainable balance between people and resources."

29. Possibly the Foundation for Democracy in Iran (http://www.iran.org/)

35. Possibly the International Trade Center (http://www.intracen.org/)
"As the development partner for small business export success, ITC’s goal is to help developing and transition countries achieve sustainable human development through exports."
They're partners with the WTO and UNCTAD.

38. Possibly the Community of Democracies (http://en.wikipedia.org/wiki/Community_of_Democracies)
"The Community of Democracies (CD) is an intergovernmental organization of democracies and democratizing countries with a stated commitment to strengthening and deepening democratic norms and practices worldwide. The CD is composed of both a governmental component made up of government representatives, and a non-governmental component comprising civil society organizations who meet as a group at biennial ministerial conferences. In 2004, CD governments also organized themselves into a Democracy Caucus in the United Nations (U.N.)."

40. World Youth Movement for Democracy (http://www.wmd.org/)
"A global network of democrats including activists, practitioners, academics, policy makers, and funders, who have come together to cooperate in the promotion of democracy."

43. "International Movement of Parliamentarians for Democracy (IMPD) is a coalition of likeminded parliamentarians dedicated to the defense and promotion of democracy around the world. It supports international human rights campaigns, especially in defense of elected Members of Parliament who are denied the right to take office or who are the victims of persecution, and challenge undemocratic practices."

KEllie, JoanMichelle, other anonymous visitors, you are wonderful! Thanks!

55. Possibly the Central Asia Caucas Institute and Silk Road Studies Program, out of Johns Hopkins? (http://www.silkroadstudies.org/new/inside/mission/index.htm), a "joint transatlantic research center" affiliated with JHU and the Institute for Security and Development Policy in Stockholm.

56. The Committee on the Present Danger (http://www.committeeonthepresentdanger.org/) is an anti-terrorism organization in the U.S.

Some links to some of the organizations blacklisted by the Iranian intelligence ministry are provided by/in/via the “Los Angeles Times”-article »Intelligence Ministry blacklists Yale and dozens of other Western institutions« (04.01.2010)
http://latimesblogs.latimes.com/babylonbeyond/2010/01/iran-intelligence-ministry-blacklists-yale-and-dozens-of-other-western-institutions.html

The leaders are in real trouble if they consider Yale University a threat. Yale would not even allow the controversial Mohammed cartoons to be published by its printing press.

Happy your site wasn't blacklisted. Even they see its informative value. Congratulations

The list is really educational. Some of the institutions are well known, others seem a bit obscure. Some are concerned with Iran issues, others are not at all. The regime can't even do this properly. ;)

nr. 12 on the list is a so called Dutch institute Hyves. This is in fact a social network, to be compared with Facebook
www.hyves.nl

Anonymous:
Happy your site wasn't blacklisted. Even they see its informative value. Congratulations

I would have been very pleased if they gave my site that kind of a publicity :))

Canal One could be the former Channel One, WPI's sat channel

'would have been very pleased if they gave my site that kind of a publicity :))'
very true! but you've always been so humble and very personal and relevant with your info. don't know what an immense publicity would do, I don't read Tehran Bureau anymore for exemple. so many sites have become self-serving, jockeying for recognition or promoting some 'new' leader of our budding revolution (cozily active putting together 'governance councils' in DC).

This is the nicest compliment I have EVER received. I am blushing with happiness.

I was in fact joking about the coverage! my site has a few regular visitors (many of whom are my blogging friends) and I make sure I am such a bitch with people who want to de-contextualize my content that I am sure I scare off many :)

In general, I am very cautious of losing my independence; so this is my little solo gallery.

This is from a commentator who asked me to not publish his/her info. But he/she is providing interesting links and perspective, so I copy-paste parts of the message that contain no link back to his/her blog:

[...]my young American Iran-loving son is learning about Iran by reading your posts and those of your friend pedestrian everyday. I can't believe Iranians fall for the agendas of those who say they are 'green' even dub themselves leader of the movement while they hate most of the actors in Iran. some even created pages on facebook against people far more intellectual than they could ever be, such as Hossein Nasr and Dariush Shayegan who are the best philosophers of our modern history
http://www.facebook.com/group.php?v=wall&gid=205508165777
if you are not a king lover or if you appreciate the history and philosophy of shia islam then you are considered a traitor. I am not an islamist not even a muslim I'm afraid, but I respect people who know why they are, much more than those who make plans about the future of Iran with Richard Perle and Michael Ledeen
http://www.facebook.com/photo.php?pid=115972&id=100000126867757
and then write about their being busy establishing the future leadership of Iran
http://www.nydailynews.com/opinions/2010/01/03/2010-01-03_call_it_what_it_is_irans_revolution.html
I hope the youth of Iran will choose their own destiny and understand what unity and democracy means.[...]
I hope you stay independent and bright. I am proud of you
[signature]

Having followed up the link
http://www.facebook.com/group.php?v=wall&gid=205508165777 ,
a first superficial impression is that on this website possibly emotional enthusiasm is leading or seducing some (younger?) individuals "to throw out the baby with the bathwater", i.e. to unduly charge some intellectuals with working against the efforts for a realization of some democratic principle, though I have not discovered the name of the venerable Dariush Shayegan.

Having followed up the link
http://www.nydailynews.com/opinions/2010/01/03/2010-01-03_call_it_what_it_is_irans_revolution.html ,
a first superficial impression is that the article is an honest, though naturally committed report and assessment – not devoid of emotions, naturally - of events in Iran by an Iranian student, living in the USA.

Of course the concern and worry of the Iranian-American commentator seems basically to be understandable and seems generally to be justified. It always is and will be: in particular, "those who make plans about the future of Iran" can be, must be, ought to be, and have to be Iranian citizens – only and exclusively. As you quite correctly pointed out and insisted on in your posting “What do I care ?!”

But:
which movement in support of whatever purpose(s) will be free of followers and adherents who tend to foster emotions and exaggerations in whatever directions ?

Important seems to be that the main core of a/the movement will hold and keep to a sort of middle ground.


A personal and subjective impression:

Compared to other protest movements [[(in the [European] recent past)]] the Iranian “green” movement appears to be surprisingly mature and steady on its admiringly rational course.

A commander-in-chief transplanted from heaven is not what the Iranian people want, not after June 12; a moral guide, rooted in the ethics and religion of Persia, a guarantor of the country’s independence, may well be. It is time for a Persian Sistani.

Thanks a bunch, William.

What's so special about Yale University? I don't get it . . .

Maybe Yale has refused to receive Ahmadinejad (as Columbia did) and accept PhD students from Iranian regime (as Oxford does) :)

The German P.E.N.–Centre has directed its written protest to the Iranian government via the Iranian embassy in Berlin
against the imprisonment of authors, journalists and writers in Iran
(the respective list added as enclosed item)
(23rd December, 2009)