Sticking my head out the swamp to take a breath; I thought I give you a taste of Ahmadinejad's "we want to make Iran the Japan of the Islamic World"

These links (all Persian) are about fruit! Iran's oil revenues are producing orange income for some, while driving to bankruptcy and unemployment the agricultural workers in Iran (~3% of population)).

Fruit imports in the last 5 years have come under scrutiny by high level officials in the ministries of Trade and Agriculture (independent ministries)--but not Ahmadinejad's cabinet. 70% of fruit importation in Iran is exclusive to three importers that also control the import of sugar and rice. Lack of control on pricing leads to first, driving local producers bankrupt and once they are out, the profit margin on imported fruit are hiked to 200-300%. This practice has helped the so called "fruit mafia" to cash 1 billion dollars, only in the last year.

The head of the Labor Fraction of the Parliament laments the fact that oil revenues are spent on fruit and rice importation from China, Philippine, Brazil, Egypt, India, Thailand and Uruguay. In a country that is the 4th produced of citrous fruit, it is a major problem that the farmers' produce rots on trees, because no proper distribution infrastructure is provided. (30-40% of Iran's produce are wasted due to this fact.) Labor specialists and activists repeatedly warn that the oil revenues during Ahamadinejad's government have not entered the economic cycle; have not turned into infrastructural investment that would guarantee economic sustainability--agriculture is only one of the fields suffering this neglect. Instead, Ahmadinejad's ad-hoc economic policies have turned the economy into a profit-based; quick-cash; importation-dependent and clandestine practice behind closed doors and outside of the professional and specialist spheres.
To give an example: in July of last year (2009) one of these "private fruit importers" registered importation of 150 Tons of American Red Delicious apples (initially reported with Israeli labels, but later clarified that they had USA labels with trademark 4015 !) Interestingly, this type of apple is locally produced in the south of Iran; but most "organic" apple producers in Iran are not able to compete with the quality of genetically enhanced American apple on steroids!! It is worth mentioning that Israeli Jaffa Oranges have also appeared in Iran's fruit market! Yes, with approval of the Trade department!
According to Khabar Online, (apparently close to the Larijani mafia--conservatives but secretely anti-Ahmadinejadists) in the last year of Ahmadinejad's previous term, the volume of American imports to Iran has reached the highest level in the past 10 years. In this year, Iran broke the record of fruit importation, spending close to 2 billion dollars on importing fruits that have been traditionally grown in Iran.
I have not been able to dig many names. I came across Hashem Arjmandi and Brothers, who opened the first fruit warehouses in Bushehsr Harbor in November 2009. He imports Banana and Apple and interestingly, he too complains about the instability of Ahmadinejad's economic policies, making his banana republic a volatile enterprise. 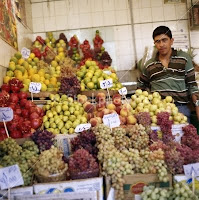 Post Script: Iran has "fruit and produce markets" that offer fruit at regulated prices that are significantly (sometimes 60%) lower than "free market" pieces--albeit the fruit is less glittering and less glamorous. Fruit is a very important part of Iranian diet. When a guest arrives in your house, you offer them tea, cookies and fruit. To not be able to offer a visitor fruit, will be very embarrassing to the host. Iranians often have fruit after siesta tea; and after dinner.
Etiquette: unless you are sure your host is wealthy, do not finish every piece of fruit that is offered to you. If you go visiting a financially challenged person, do not refuse to take their fruit offering. If you don't eat the little dry and spotty orange offered to you, the host will be embarrassed that his offering has been inadequate and unacceptable. Living Persian is a choreographed act--it is a delicate dance of generosity, sacrifice and yet stoicism and common sense.
Posted by Naj

This was an AWESOME post. I'm from Khuzestan so I know firsthand the utter pain of watching the most sumptuous oranges in the world rot on trees :(

Iranian consumers are not different, as all juggle inflation and low incomes. Like Russians, Turks and others in Eastern Europe, pensioners and retired people here are especially squeezed by reduced purchasing power. Economic pains of transformation, from a state-planned system to a market-managed economy, are expected to repeat events seen elsewhere.

However, Iran’s macro-economic scenario is turning the corner. Long-term investments of the last decade are now producing results, especially in the food and pharmaceuticals sectors as import dependency is almost eliminated: Iran is now a net exporter of wheat and is expected to be self-sufficient in barley (for animal feed) and rice within the next four years-- whilst population has doubled in the last 30 years and as a vast part of its territory is arid. The food processing sector has no spare capacity, busy with seemingly unstoppable domestic demand and exports to markets from Afghanistan, Central Asian and Caspian to Iraq, the Persian Gulf region and Eastern Europe.

Iran’s hot topic of discussion is about the cost of housing, growing demand for its young population (where about 1.5 million of 70 million people reach the age of 18 every year) and rising cost of building materials. The building boom seems to be endless. And like all other countries, Iran is in an endless stream of debates, opinions about government services, trial-and-error tactics, and suggestions in acres of newspaper print about more and better jobs, banks and loans, schools, education, hospitals, roads and politicians that plan factories or government-subsidized investments or pet projects in their own districts. Most significant of all is that Iran has virtually no foreign debt and it can spend its currency reserves on capital goods, rather than import of food.

Where did you meet Mohammad Hashem and his brothers?
And did he really tell you that

Cause I myself am an Arjomandi and it so happens that I google my name every week to make sure nothing negative comes up as businesses do look into that, and i ran upon this article and i had to give in an read

thank you a fellow arjomandi

Anonymous; I don't think there is only one clan of arjmandi in Iran. I have not met the fellow I cited; and I translated his name from the follwoing article: