Iran's slain physicist WAS NOT a nuclear scientist. He was just a Green professor who supported Mousavi 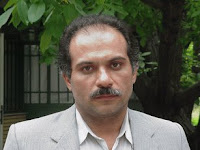 The IRI's rush to blame the assassination on America and Israel--hence claiming that Masood Alimohammadi--was a nuclear scientist has outraged the Iranians. The regime has been quick to claim an open supporter of Mousavi, a man who joined his students to protested the rigged election in June, a martyr of its "nuclear cause" (Persian).
According to Ahmad Shirzad, his close friend (they trained together in Sharif University's Physics department--where the assassinated professor became the first to obtain a PhD in physics in Iran) and a reformist member of parliament during Khatami's presidency, Alimohammadi was a Particle Phycisist, specializing in elementary particles and his research did not relate to nuclear energy production.
It is ironic how a regime that claims TOTAL control of intelligence and security, that tracks and monitors and wires anyone with a university professorship--especially if they are 'green', has not been able to detect a targeted, remotely-controlled bombing attack! It is ironic that the IRI's Foreign Ministry--and not the Intelligence Ministry--was the first to RUSH to pointing the finger to Israel and the US!
It is ironic that again, the name of that invented "anjomane padeshahi"--an obscure entity that even monarchists don't know about and we have learned about from recently handed in death penalty sentences to a few individuals who have been forced to making false confessions--is announced to be responsible, but later denies having had any responsibility. (This "anjoman" seems to be an intelligence trap, used to identify gullible opponents of the IRI and carry terrorist attacks to claim responsibility for and create an illusion of the violence conducted by the opposition)
It is ironic that the chain-murderers of the IRI, blame this killing on American Zionists; and it is ironic that creatures who consider themselves "reliable" alternative media, seem to wish to buy that crap!
Posted by Naj

THE CASE OF MASOOD ALIMOHAMMADI OR THE SEVEN DUPLICITIES

The following SEVEN DUPLICITIES of the government-official accusations have been levelled at elements inimical to the government or at foreign countries like Israel or the USA for having committed that murder – according to Naj - driven and urged on by their hostility towards Iran. Fortunately, the responsible culprit has finally – some minutes after the lethal assault - been tracked down by - and thanks to - the Foreign Ministry. “L'assassin est toujours le Jardinier!” Corroborative crystal-clear evidence has been collected within a matter of minutes – by malevolent contemporaries labelled as imaginative duplicities. Here again a brief overview:

1) Masood Alimohammadi was a supporter of the “green” movement
2) He did not have anything to do with nucleare energy production
3) The regime claims total control and intensively monitors intellectuals and scientists with success via technologically advanced methods
4) The Foreign Ministry - not the Intelligence Ministry - was the one claiming to be the first in the know and to come up with that accusation
5) an obscure organization has been accused of being involved in that assassination, though nobody seems to have ever heard of that formation and (!) this same grouping has denied any responsibility
6) it is the official IRI organs that are known to have been involved in the “chain murders” that now have the nerve to accuse foreign state institutions and sinister organized forces
7) even Iranian media, which claim to be reliable, have bought these easy-to-see-through theories put forward by government circles as the final truth without subjecting these theories to any kind of journalistic investigation deserving that label

Completely new seems to be the assumption and allegation that the main tophic of Iranian foreign policy, »Iran as a nuclear power«, has been and is controversially discussed in Iran. Foreign policy is one important area where there seem to be no discrepancies of opinion whatsoever between presidential, government-official views and the take of the »green« movement for more democracy on that issue.

Is the »green« movement for more democracy not willingly and readily represented by today's ruling power elite as an anti-revolutionary terrorist, foreign-inspired and foreign-steered incarnation of Satan ? Is not such a foreign-fostered collective predestined to be guilty of any conceivable atrocity ?

Though the fundamentals of Iranian foreign policy and Iranian long-term interests represent a constant, undisputed and unquestioned area within Iran's political landscape,
current public presidential demeanour and statements abroad however seem to be considered extremely embarrassing, due to the presidential somehow bigmouthed and provocatively simplistic approach.

Also a look at the list of his publications here,
http://www.slac.stanford.edu/spires/find/hep/www?rawcmd=a+m+alimohammadi&FORMAT=WWW&SEQUENCE=

It seems that intelligence gatherers display information when it benefits those in power. True for Bush when he wanted to go to war in Iraq.

Guys, sorry for the shameless link here, but please take a look, I'm sure it would be something all people who feel deeply about the illegal wars waged since 2000 would be interested in.

Come have a look, all comments welcome!

(Sorry for posting this twice, just trying to get the link working!)