ELECTION RESULTS IN IRAN ARE FRAUDULENT! 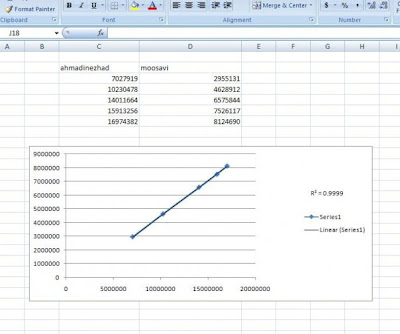 This is fascism out of closet! Why?
Because at the same time that IRNA and CNN projected a win, the "special forces" in Iran announced "Manov-re ghodrat", or "Power Maneuver", literally!
Because all public assembly was announced illegal!
Because the web sites of the Mousavi Party were being closed one by one.
Because  these numbers are in stark opposition to exit-polls!
Iranians are now suffering the same pain that Ameircans suffered, when Bush was pulled out of boxes for the second time!
I'd have been more trustful if the results looked like 49/48, 51/40 ... but not this! This is f@%% fascist fraud!
FFF ...
Posted by Naj

This is actual data from the announced vote counts?? That's crazy. They could have at least added in some artificial statistical variation, right?

yup, some frind has gotten the numbers from TV as they were announced through out the night!

i have deployed people to gather more such numbers in iran. where is time when you need it ...