Khamenei is directly responsible for this bloodshed. He surpasses Khomeini's infamy in brutality. SHAME SHAME SHAME! 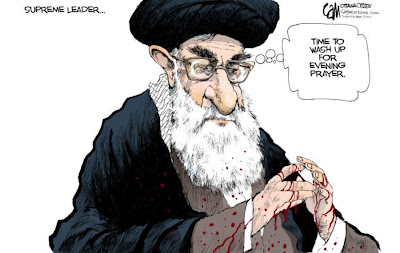 Did you see what happened today? As would be Protesters were approaching Parliament 500 Gov't thugs armed with axes, guns, and clubs attacked them.. Hacking them up shooting them clubbing them and throwing them off a foot bridge!
Old men women whoever! I just saw a report on Iranian TV that the Gov't forces kept things peaceful. I refuse to believe the truth can not get to the rest of the people. This is sick!

Jim, yes I saw that on CNN too.

I have to warn that CNN does a bit of over-sensationalization. Yes I am sure there was shooting and unrest in Baharestan, but I also believe the pictures shown by press TV.

We Iranians need to keep up the pressure, but trust me by and large 500 thugs on a payroll CANNOT put the genie back in the bottle! I think people shoudl stay home and resist in a different way now; because these violent acts are fueling the neocons propaganda machines. No matter WHAT, you have to keep in mind that WE DO NOT NEED HELP FROM AMERICA! (ignore a little 21 years old kid who is frightened and emotional and calls CNN ... her reaction is understandable, but the mature portion of the Iranian "resistance" DOES NOT NEED AMERICAN HELP!!

And pray tell us where and how you got this information?

More lies will not advance the cause of Liberty anywhere.

Indeed.
But now you have Neda as a symbol -- poor girl; and green is good.

My generation fought and demonstrated for seven years ('68 to '75) to get US out of Vietnam. Sometimes discouraged but never quitting we finally won out. Time must be considered in your fight. It is your friend if you keep pounding at your objective.

As a singer of that era, Jim Morrison of The Doors sang: "They got the guns but we got the numbers".

I hope the The Council of Experts will make a ruling soon on the discontinuation of Khamenei's leadership. I wonder though, what if Khamenei thumbs his nose at the Council? Might he try to have the Council arrested? The loyalty of the Republican Guards could really be tested. Will they follow the dictator, or will they follow the will of the only governmental body that has the power to remove him?

It is very sad. These kids who were mercilessly brutalized, or saw the vicious attacks on their friends are going to grow up with a very different view of the Islamic Republic of Iran then I did. I’m 25 years old, and until this Friday, I always thought this man (the leader) knew what he was doing. I may have had VERY STRONG reservations about the system he were running, I may have DESPISED him even in the corner of my mind, but I thought that in the end, he was on the side of his people.

Heck, this man was standing on the very grounds where students were KILLED, BRUISED, CUT … just days ago and he did not have the decency to send them a half-hearted condolence. And he didn’t stop there. He accused them of being foreign agents and hooligans.

I just wonder how and with what mentality these kids are going to grow up ...

Pen Name: ghanoon salari?!!!!!! Do you consider arresting poeple without any charge is ghanoon salari? Is unleasing un-uniformed individuals to brutalize people, ghanoon salari?
And, people ARE submitting complainst through legal channels, but is a CRIMINAL like Ghazi Mortazavi the guardian of Ghanoon?

The law is broken in that country on a daily basis by the PRESIDENT (e.g. by launching accusations) ... what the hell are you talking about?

Others,
Iran's history is a bloody one; we are not really badly traumatized by these images, they don't turn us into criminals or deranged psychos ... they strengthen our resolve. Somehow, we are ALL fighting for the same thing, even some of thos Basijis really think they are trying to protect Iran from foreigner's influence. The art now is to UNITE all of us ... I looked up to the religious men to do that, they have shattered my hopes, they have broken my heart ... and have invalidated my argument that in Iran, religion is the BEST anti-colonial glue ... GOD DAMN THEM for breaking us up ... god damn them ... we have had monarchies before which we have broken apart ... but this was to be rule of god ... it has turned into rule of satan now! This is a dangerous immoral path Khamenei has walked us through ... I am LIVID and my words cannot describe HOW ANGRY I am ...

Please do not take offence but why is it that people from the west fail to realise that there can be any other "right way" of existence other than their own. Well may be its something common in all civilisation (specially when they are dominant) and I should not single out the west. Any system is only as good as the one who are practicing it .... I think in this case by behaving in a partisan manner (if he indeed do so) Iran's supreme
leader did a dis service to his country and betrayed the trust. Its the same thing as Tony Blair and Bush who for the benefit of a few led their country to war and in order to do so lied to the people. Yes many people protested but I don't think most American or British people knows or understand what delivering freedom and getting exposed to sci-fie technology in the form of getting bombed means .... death from the sky. Probably that is the reason the protest did not reach the fever pitch ....but they too betrayed the trust of the people and I dont think the outrage of the people was strong enough. In a way what I believe (I may be wrong....what do I know of Iran? though strangely Tehran is closer to Delhi than my hometown is ) the Iranian people understand and respect democracy more than the people in the west. I know people in the Internet hate the Besij, police, revolutionary guard ...if they are indeed they are all thugs (many of them must be ) but I doubt they are all ... I guess many of them actually believe that they are doing the right thing and the protester are unpatriotic.... any establishment will work overtime to make the law keepers believe such a thing .... the headless advise from the outsiders to hunt the besij's are just the thing which shows the shallowness of those people .... unless you are a thug ....once you realise people who are protesting love their country and patriots and that is precisely why they are protesting
they will refuse to act like butchers. It takes courage to practice non-violence and I think by pushing the non violent people off the street and by provoking the people by violence the regime tried to kill the non violent ideology of the protesters. That's the thing with corruption it corrupts all ... honestly I dont know why but last 5 days I have been sitting in front of the terminal and watching and crying .... if only we the youth of our country cared for the country so much things would change so much ... I guess may be in Iran it was similar ... everyone cared but did not know each other ...felt helpless and frustrated ... and the green revolution or whatever it is ...its success is that suddenly they realised they all do. If the powers that are who are themselves revolutionary dont fall into the trap of "politicians" they would realise how the revolution their dream of a strong nation has succeded .... its probably between the father and the daughter we should all just shut up ? But one thing is for sure Ahmedinejad is an incarnation of devil and The supreme leader has betrayed the revolution, trust of the people but more importantly himself and GOD ... he will never be able to sleep and fear the day when he has to answer to God. Hope he repents.

Naj
I have of course been keeping an eye on it but am watching hoping. I keep hearing from leaders that it is not dead just gone underground. I never did like what I saw in Ahmadinejad but Khatemei showed his true self the Friday. All I see now from those two the Basiji and the IRG is kill. I don't see them relenting.